A free to play mobile game that's actually worth playing.

Mobile gaming is probably in the top three list of the biggest disappointments in my life within the past five years, right below the realization that I will never play in the World Cup and Paulo Cohelo’s Aleph. Mobile gaming started with so much promise, leading people to speculate that at some point smartphones would even replace hand held consoles. This was before respective app stores were flooded with sub-par free-to-play games that hold content, and even the ability to play at all, ransom to micro transactions. Nevertheless, mobile gaming found a place in my life. Specifically, the daily train rides to and from work, which are long enough to make me crave entertainment, but not long enough to get into a “real” game. I generally avoid strategy games on my phone since they usually feature only one strategy: use credit card on store. But when I saw that Mistwalker, the studio founded by Final Fantasy creator Hironobu Sakaguchi, was releasing Terra Battle, a free to play strategy game for Android and iOS, I had to check it out. And I am glad I did, because this is a great example of how to do a mobile game right.

The best way to describe Terra Battle is a minimalist JRPG with an element of card collecting, and a tile based strategy battle system. The story is very simple. The world is dying and so your characters decide to go look for the Maker (the JRPG stand in for God) with the hopes he’ll stop the unspecified calamity. The story is told via text before every battle and sometimes it can be as brief as one sentence. It works well for mobile since you will be able to dive right into the action without having to put up with the long cut scenes or dialogue sections that are common in the genre. 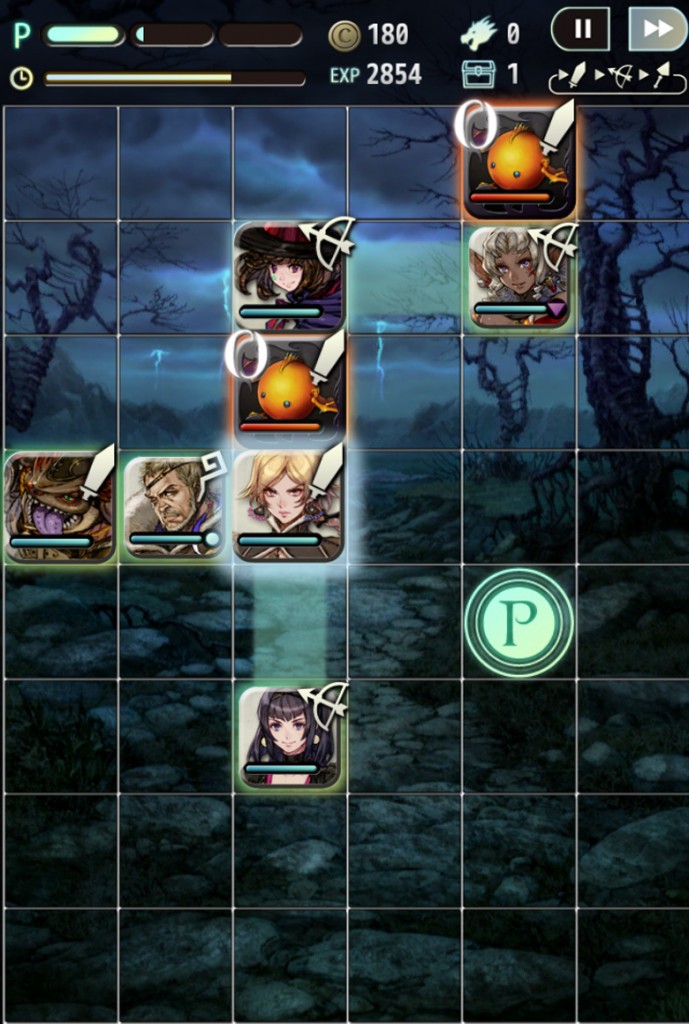 The action takes place on a 6X8 grid where you guide a group of up to 6 characters. In order to deal damage to your enemies you must flank them, which will automatically cause your characters to attack. If you have characters linked in a vertical or horizontal line with the attackers they will get to join in which will cause you to hit the enemy multiple times. This makes positioning and planning important, but the game is not that simple. Enemies, of course, can attack the same way and will attempt to flank you. They also have special attacks that can be performed without flanking you, and can range from annoying, such as damaging an entire row or column, to dangerous, like poisoning your fighters, to lethal like casting confusion, or damaging your entire group and moving them out of position.

Characters and monsters also have classes, which determines which weapon they use. Weapons use a kind of rock/paper/scissor system. Swords dominate bows, bows dominate spears, spears dominate swords. There are also mage-class enemies, which are not in the weapon system and tend to have lower attack stats, but also have useful special attacks. These can be massive healing, boosts to defense or offense, or devastating elemental attacks that can cause massive damage to several enemies.  Some unique characters also have special attacks that are unique to them. Some might be regular attacks infused with elemental damage, or attacks that are completely new to them such as granting everyone around them the ability to regenerate. There is obviously an elemental system at play that will be familiar to any RPG fan (of the W or J variety). What this all amounts to is a system that is simple on the surface, but has a lot of subtlety. 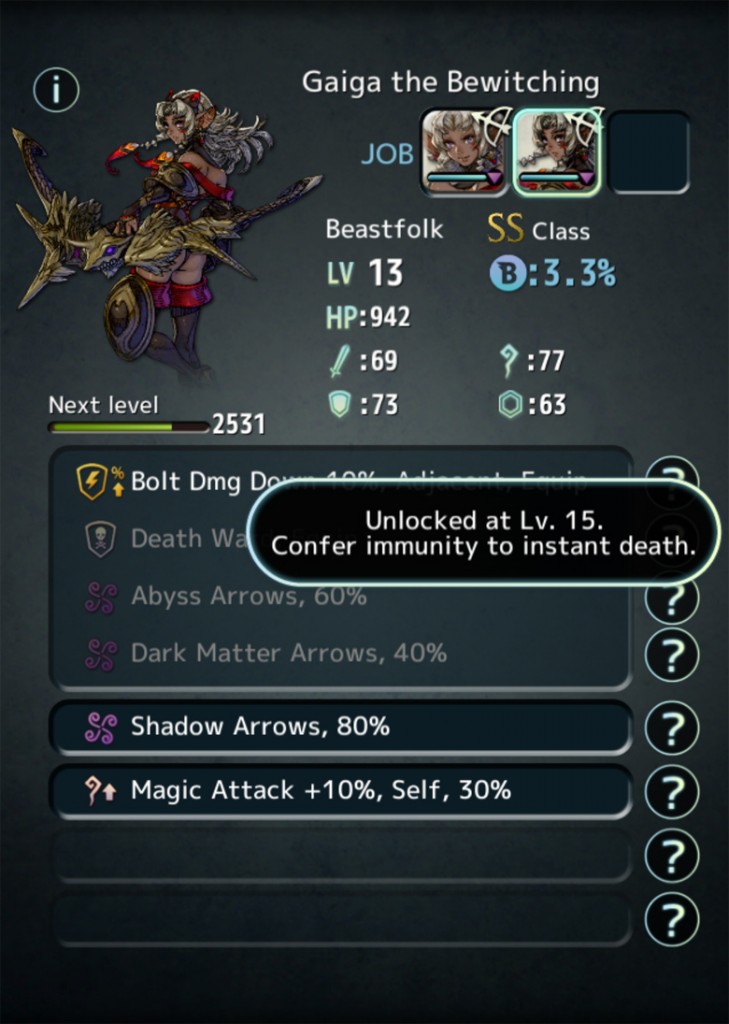 Initially you start with a handful of characters. As the game progresses you will earn more. You can randomly get party members by recruiting monsters from encounters, which seldom happens but can be a pleasant surprise. You will also get some characters from the story as you progress through the game. Most characters, however, you will recruit through the tavern. There are two options, you can choose the Path of Fellowship, which uses gold that you acquire through your battles, or the Path of Truth, which uses Energy, which is rewarded by clearing chapters and special events or you have the option to pay for.

This is probably the part of the game that I dislike the most. The Path of Fellowship companions are monsters or generic soldiers. They are fine at first, but you will eventually want some of the rare characters, who have several jobs and much better stats and abilities. You are far more likely to get those from the Path of Truth. In other words, they cost energy, but they are random. This means you can’t choose if you get the type of character you need, or even worse, you may get a character you already have. This gives them a skill boost, but it can be annoying to get the same character you are already not using again after saving energy to get a new character. Energy has been plentiful thus far, given as reward for quests and as part of the Download Starter, but I don’t know if that will be the case as the game continues to evolve. I understand why they did it, the bills need to be paid, but even giving a draw choice between 2 or 3 randomized characters would have made this better. 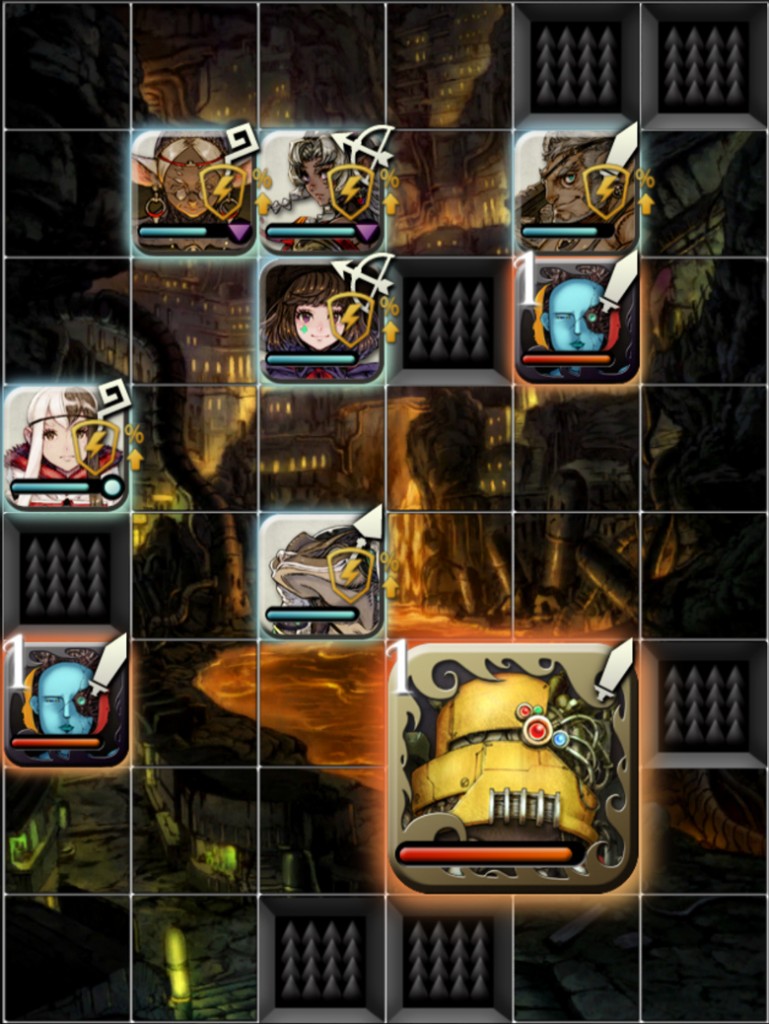 There is a stamina system, which you use to enter battles and replenishes over time. This could also be considered a pay-wall, but I have never found it to be an issue. The system works nicely for playing in short bursts, but it will definitely cause some frustration if you try to play this game for long periods of time. It takes only a few minutes to get a unit of energy, so it’s still not as egregious as a lot of other games.

One the banes of free to play games is the insistence that you spam your friends so that they will join and giving you something in return, usually something rare that you need to play the game and is behind a pay-wall. Terra Battle doesn’t have this. Instead, they have the Download Starter. The more downloads of the game there are, the more features and characters will be added to the 1.0. More music, more characters, more events, more game modes etc… The game never asks you to spread the word, rather they leave it up to you to spread the word if you want. The game will still reward you for the number of downloads, even if you do nothing to help. This works, I am writing a review of this after all, and it is not intrusive and it doesn’t feel compulsory. 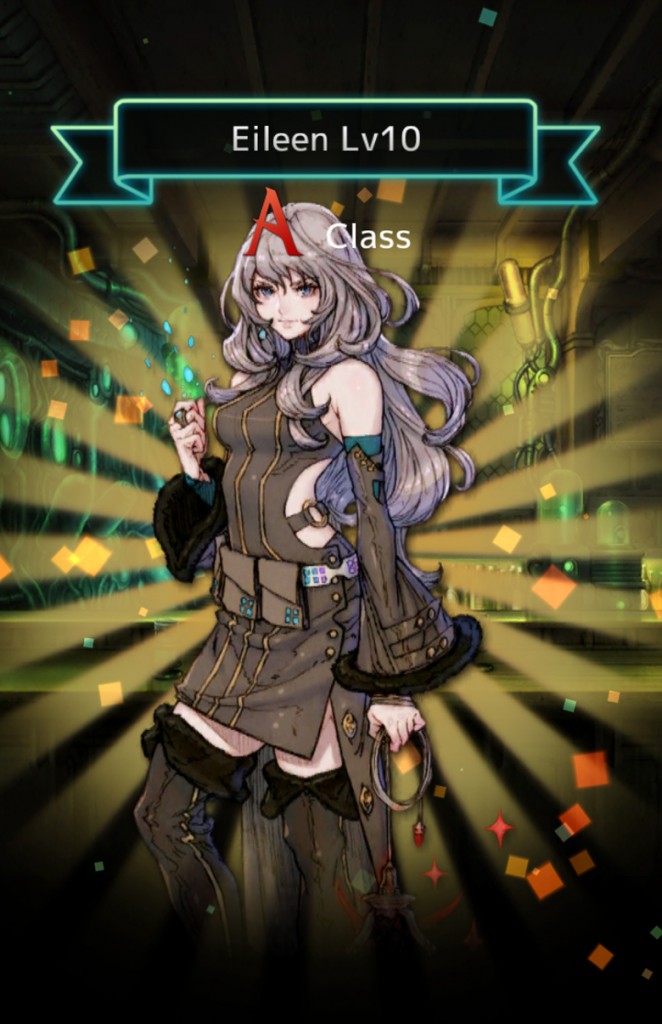 The presentation of the game is great. The character designs are excellent if very JRPG in style, and the music composed by Nobuo Uematsu makes me feel sorry for muting the game as I play I play in public. The best part of the game is that the gameplay is no joke. In most F2P mobile games, gameplay really boils down to tapping the screen and waiting. Terra Battle starts off easy enough, but the game expects you to understand its mechanics after a couple of chapters, and eventually, it will start throwing things at you that you didn’t expect. This is real strategic game play, which after the experiences the past few years, I did not think we would see on a mobile platform.

Terra Battle is currently available for Android and iOS at no charge, so I strongly recommend you check it out if you are looking for something to burn some minutes on some waiting room or during your commute. Might as well try it out. It’s hard to beat free.