It's tower defense meets Tetris, and it's awesome.

There’s probably something out there in this big old planet that just isn’t for you. There’s nothing intrinsically wrong with this mystery item, you can understand why a lot of people enjoy it, but every time you get a taste you spit it out. For me this thing is real time strategy games, a la StarCraft, Command & Conquer, etc. I get that a lot of people love the micro management and feel satisfied when their best laid plans go off without a hitch but I’d rather fall down a flight of stairs than play a StarCraft 2 match online.

That’s why I assumed I would not the best man to review the capital-letter-missing rymdkapsel. The game is a self proclaimed “meditative strategy” experience available on iOS, Android, and the PSVita.

The concept is fairly simple. You’re tasked with building a base out of a series of colored blocks shaped suspiciously like Tetrominoes. The blocks come in all the standard shapes and sizes. And much like Tetris you even get a little preview in the top left to see what blocks are coming down the pipe. Assisting you in building these blocks are small white colored pellets called minions which will serve as the sole unit type in the game. 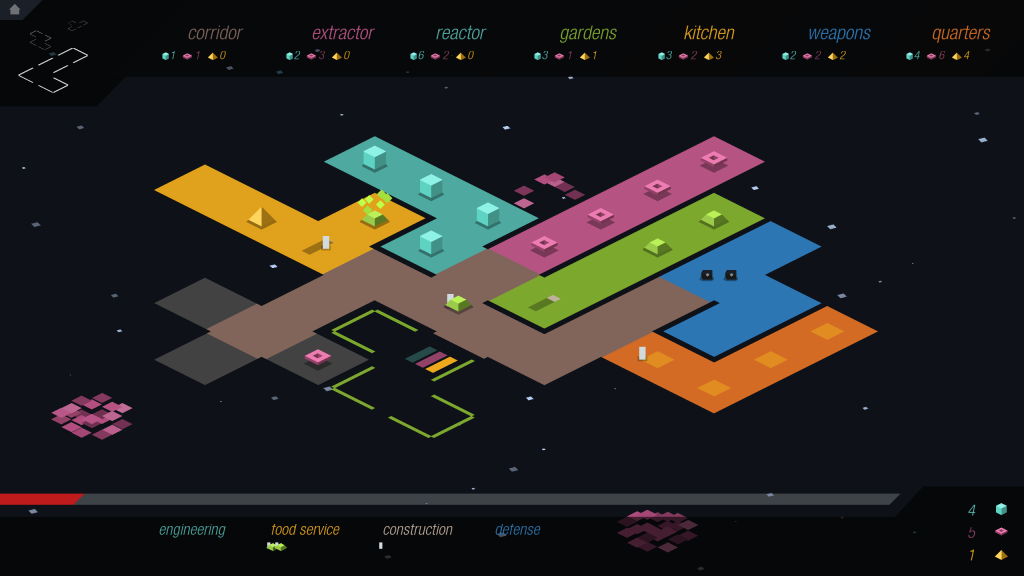 The first set of rooms you’ll want to build are corridors. These will make up the backbone of your base. They’re simple, easy to build, brown blocks and will serve as attachment points for the different rooms in your base. You can’t build another room without it touching a corridor so you have to plan how you build these carefully so you don’t wind up cramped and unable to move in the direction you want to.

Reactors and extractors will produce two of the primary resources needed to build further in the game. A Reactor can be built anywhere while an extractor must be built near one of several resource deposits scattered throughout the map.

Next you have gardens and kitchens which will serve as your food service. Food can be required as a building material, it’s also used in collaboration with the “quarters” piece to produce more minions.

Finally you’ll have the weapons piece which will allow you to fend off your attackers. Oh did I mention you’re being attacked? There’s an ominous red bar that adorns the bottom of the screen at all times. It fills up slowly (at least initially) and when it reaches capacity a wave of enemies will be sent your way. The enemies won’t damage the structure of your base, but they will pick off minions, particularly ones that are not manning defense weapons. Once all your minions are gone it’s game over. 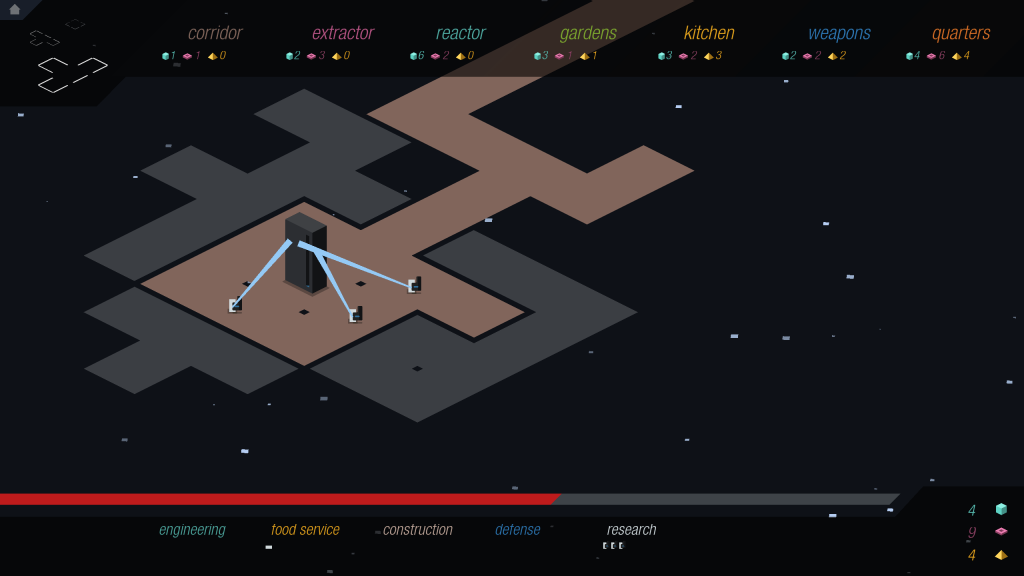 Researching monoliths will grant you extra bonuses and make you more powerful overall.

The beauty of rymdkapsel is the simplicity with which you can command your minions. Need them to produce food? Just drag as many as you want into the “food service” section at the bottom of the screen. Want them to man the cannons? No problem, just pick how many you’d like and drag em on over. When a minion has no more work to do they will simply lay on their side, so it’s very easy for you to see who is busy and who is not.

Of course simplicity comes with its frustrations. It’s nice being able to just tell your minions to build, but they simply build in the order you direct them. There’s no real way to assign them any sort of logic or make them follow a certain path. It wasn’t uncommon for me to see a minion walk right past a perfectly viable supply to go grab a different one that was completely out of the way.

As your base gets larger you’ll find that your bottleneck is generally the amount of time it takes for a minion to get from one end of the base to the other. Only have one set of guns and it’s on the other side of your base? You better send your minion over there early on or he’ll get picked off before he makes it. Construction running super slow? It’s probably because your reactors and extractors are all too far away from wherever you’re building. 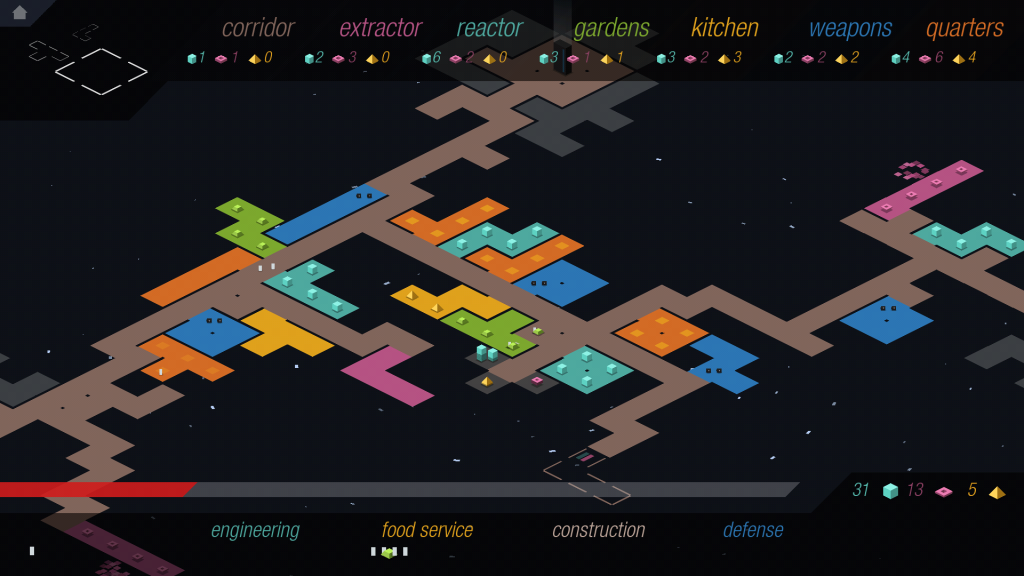 As you explore the world you’ll track down large items floating in space called monoliths. Once you’ve connected a corridor to a monolith you can send minions out to research it. Researching monoliths does a number of things including making minions move faster, and increasing the range of your weapons.

So how do you win? The game gives you 3 mission objectives to complete. First you’re tasked with researching all the monoliths on the map. Next you’re asked to survive 28 waves enemies. Your final goal is to research all the monoliths in under 45 minutes. Complete all of these and you have successfully beaten the game. You can of course continue to play, but it won’t be towards anything beyond surviving more waves of enemies. I know some folks have levied complaints that the game is too short, and maybe it’s just because of my innate terribleness when it comes to strategy games, but I sunk quite a few hours into this before I was able to successfully complete all three mission objectives.

Completing the game will probably take you a few hours, maybe three or four depending on whether or not you’re bad at strategy games like me. It’s a very fun game though and I found myself sneaking time with it whenever possible. I’d definitely recommend picking it up, especially if you’re like me and get easily stressed out by the sheer levels of micromanagement in traditional RTS games.