Aarklash: Legacy is a game that has high production values but doesn’t want to uproot your sensibilities as a gamer. You won’t find anything new or exciting in this world, from the mechanics to the all too typical character personalities.

You start off the game practically being chucked into the middle of an in-game cutscene. Four characters of various races make up the Wheel Swords, a ragtag band that has guild orders to straighten out an issue surrounding some freeloading noble not paying what he owes. The plot goes further than this of course, and a few little surprises are thrown in as you embark on your fairly linear quest. 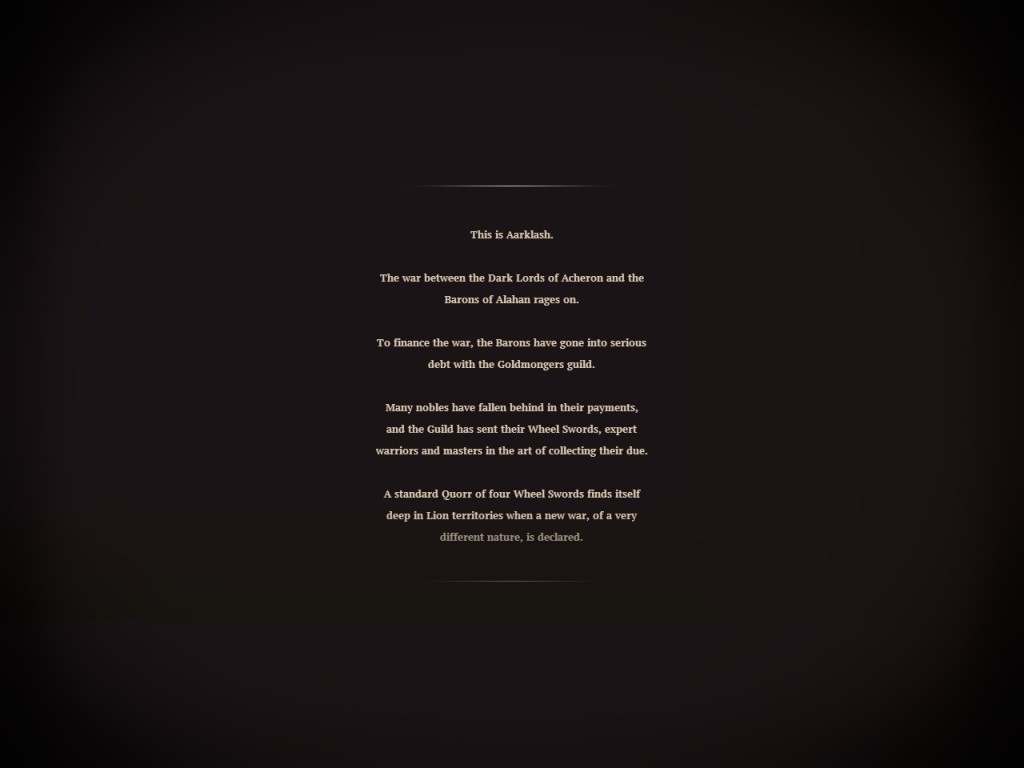 From the time you click to start the game until you’re essentially thrown in-game, this is all you get.

The dialogue immediately feels hollow, as each character’s lines appear to be saying “I need to try really hard to overtly show you, the player, which generic character archetype I am.” The male goblin is a bit pervy and snarky, the female spellcaster is mouthy and driven, the tank is a sort of dog woman who is always angry even when it’s unwarranted and growls a lot, and the healer is all zen and stuff. You get the point; there’s not much special here, and it probably hurts more than helps to even have them speak at all given the poor writing.

The game plays a lot like a real-time strategy as far as moving and ordering your 4 heroes is concerned. You can drag a box around them, right click to order them, but the real draw of the game is that combat must (or definitely should) be meticulously planned out in pause mode. You’ll want to take the utmost care to queue orders for every one of your heroes, unpause and pause often, and rearrange their orders as the situations evolve, because when you unpause, battles happen in real time and your guys can be dropped right quick if you stop using strategy. Enemy units have a lot of statistical information that is publicly available through their portraits, and you’d do well to use their armor types and weaknesses against them. 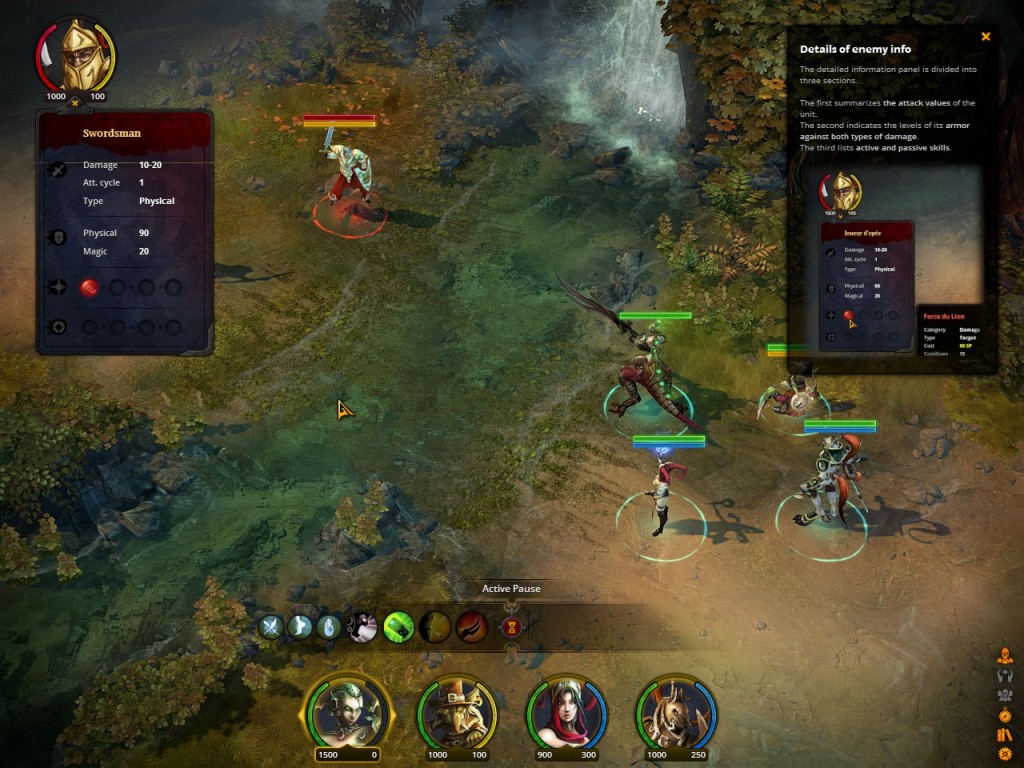 It’s important to read the statistics so you know how to approach the situation.

When combat is completed, you’ll gain experience and items will drop on the ground in Diablo fashion, except usually only 1 or 2 items drop from the entire encounter. They can be equipped to your characters in a very limited number of jewelry slots. Experience is also gained from encounters and levels can be used to dip into upgrade trees that passively upgrade one of each character’s 4 abilities. It’s pretty underwhelming though and feels more like a chore than anything to have to sort through a bunch of earrings and decide who would best be suited to wear them. For some reason, Aarklash just isn’t good at making me feel remotely excited about loot.

If my writing here sounds a bit monotone, it’s because Aarklash really makes me feel no way about it one way or another. I could take it or leave it. Nothing is inherently broken, but at the same time there’s absolutely nothing gripping or engaging about the experience. The main menu presents you with only one play option, which is the campaign. I imagine that when it’s over, there won’t be any reason to ever play again.

The art is very nice and it’s a shame that someone put their talent to use on a game that doesn’t match up. It looks a bit like what a Warcraft 4 might look like if it existed right now; a little touch of tech, but mostly good artistry and texturing. 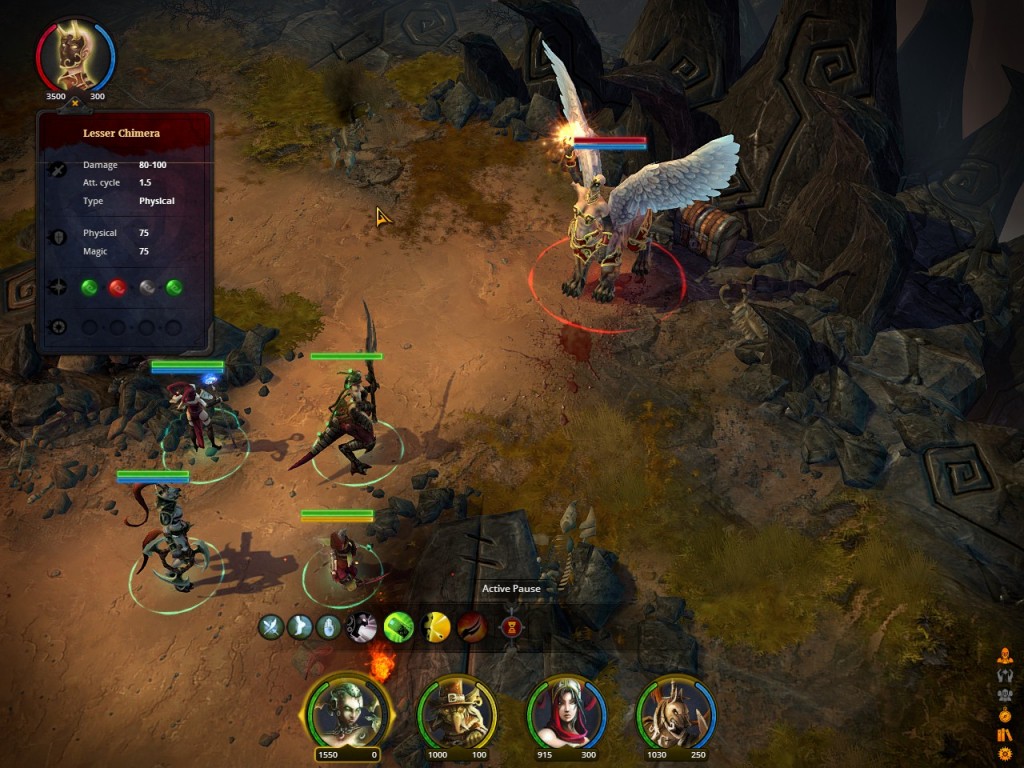 A treasure guardian. Turned out it was guarding a couple of underwhelming earrings.

One thing that must be said about the game, and this could just be my system, is that there’s a very annoying hitching that occurs at very regular and frequent intervals and completely mars the otherwise smooth experience. The hitching will freeze the game for several seconds at a time, and occurs more than once every minute. I would highly doubt it’s my system as all other games perform as expected, but honestly this just gave me one more reason to not want to play Aarklash to completion. In fact, it makes the game nearly unplayable in the sense that it’s like someone rips the controls out of your hand every minute or two for 5 seconds, and that sort of repetitious annoyance I can’t take.

Because I haven’t seen anyone mention this issue on the Steam discussion boards, I haven’t factored this hitching problem into my final score… but keep in mind that it is incredibly annoying, and I probably would have played the game a little longer if this issue didn’t exist. That said, the humdrum story would have wiped me out eventually anyways, I fear. 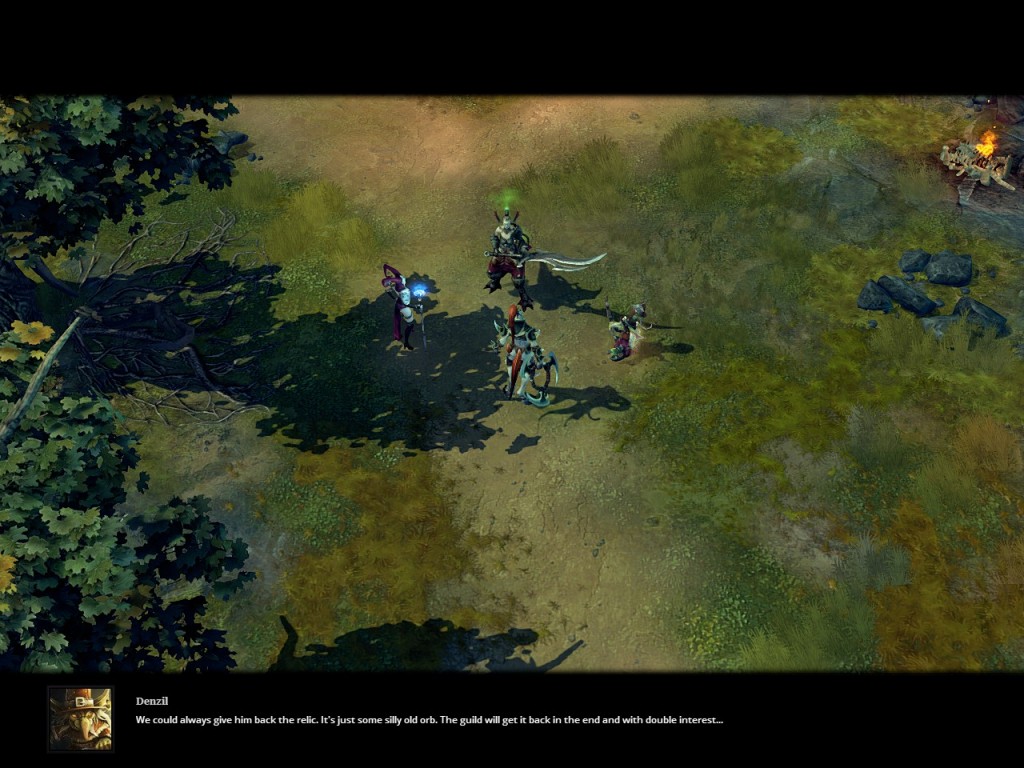 In summary, there isn’t much to say. To answer the question of whether Aarklash, in all its linear one-dimensional glory is worth the hefty $20 price tag, I would say that it isn’t. If you’re a really hardcore strategy fan and want a challenge that also happens to look good, this might be for you as even on Normal things can get hairy really fast, but don’t expect an engaging story or interesting characters.