If you love Monster Trucks and you own a smart phone then there’s a pretty good chance you’ve already played ODD Game’s new PC release, Monster Truck Destruction. The game was released earlier this year for iOS and just recently ported over to Android. The game’s latest iteration is now a PC port which you can find on the UK based site Gamersgate. It’s also currently waiting in line on Steam Greenlight so you could see it hitting the Steam store any day now.

So how does the game translate from a mobile app to a full-fledged PC title? Not very well unfortunately. 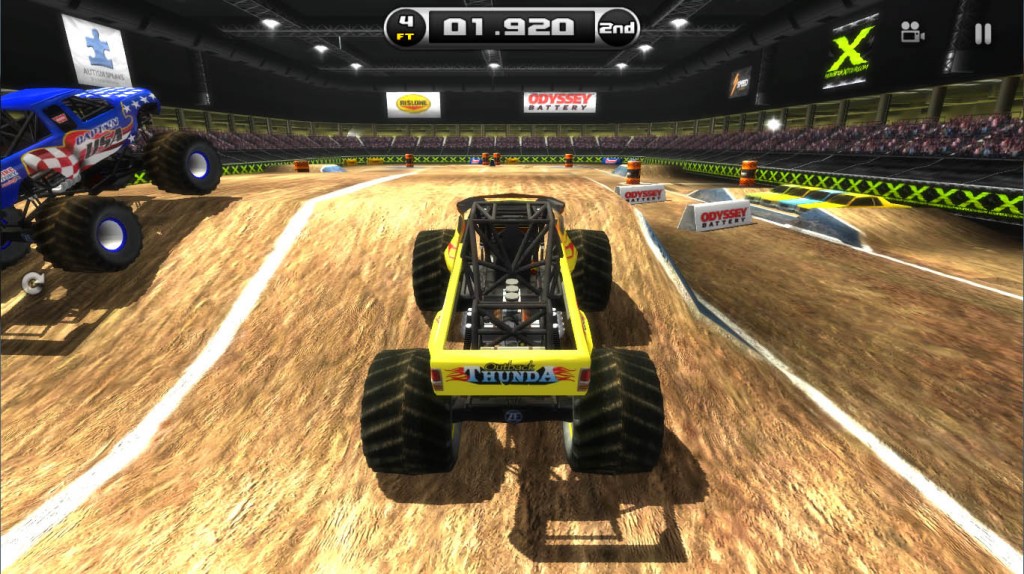 My first experience with Monster Truck Destruction was of it not working properly. On my primary Windows 7 machine clicking “Play” from the launcher would just cause the application to crash. I eventually learned that if I just waited the launcher would come back and clicking play a second time would start the game.

I wanted to make sure it wasn’t just my PC causing problems so I tested from another machine, this one running Windows 8. Here the game wouldn’t actually launch at all, I was able to get to the launcher like before but the application window would just crash no matter how many times I hit play. I turned on compatibility mode and even upgraded to Windows 8.1 but nothing would make the game launch. So do proceed with caution when you see “XP or higher” on the game’s system requirements list. 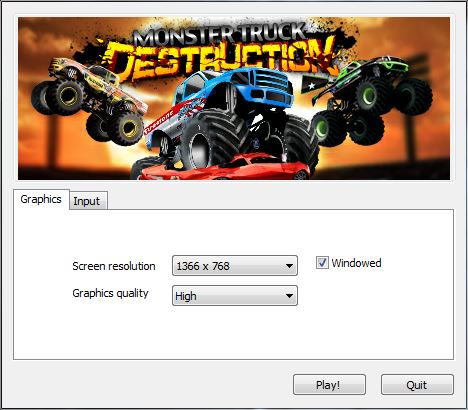 Depending on your OS you might be looking at this launcher for awhile..

Once you get past getting the game to launch you’re presented with a pretty lackluster PC port of the mobile version. There doesn’t seem to be any visual, audio, or control based improvement in this port, it’s just the exact same game you can play for free on your iPhone except it’s fifteen dollars. Micro-transactions have been stripped from the game in favor of a flat PC fee, other than that it’s business as usual.

The developer couldn’t even be bothered to update the text in this release. In between each race you’ll be prompted to “tap to continue”. I guess this would work just fine if you had a touch screen display but as we already covered the game doesn’t work on Windows 8.

Tap the monitor all you like, it won’t help.

Once you’re up and running it’s time to buy your very first monster truck. The game gives you $150,000 to start which is enough to choose from about six different trucks. Each vehicle has a single tracked stat, the only stat that matters when we’re talking monster trucks: Power! All the vehicles in the $150,000 range have a starting power level of  650 and from what I can tell they all control exactly the same.

You can drive forward by pressing the up arrow on the keyboard, brake and reverse with the down arrow and steer with left and right. The game does not have any native controller support but the launcher does give you the option to re-bind your keys.

Gameplay in Monster Truck Destruction boils down to two modes: Drag Races and Freestyle events. Drag Races are simple enough. You and a single opponent will run an identical track and whoever gets to the end first is the winner. Freestyle has a little bit more variety to it. The mode plays kind of like a Tony Hawk game in that you’re tasked with pulling off tricks or destroying property and rewarded with score multipliers for mixing up your style as you go. Both modes tie into offline (the game has no multiplayer components) leaderboards with other NPC opponents that you never see. Get the highest time or best score and you win some money. Come in last and you usually wind up losing money to repair your truck.

I admittedly don’t know a lot about monster trucks so I hesitate to say whether or not the trucks handle the way they would in real life. I can however say that they don’t handle well for a video game. It’s very easy to over-correct when turning your behemoth truck and it becomes particularly frustrating during the drag race modes where you have to be relatively precise in order to win the race. It doesn’t help that several of the tracks are designed so that you will literally run into your opponent. I’m sure this is to add an element of chaos as your truck flips over mid race but it’s also very difficult to recover from and on those tracks the NPC beat me almost every time.

In Freestyle mode I was able to win pretty consistently. As long as you never stop punching the gas you can generally rack up enough points to beat everyone else. This is probably the biggest place in the game where the mobile graphics and engine will take away from your destructive fun. The only objects that you can actually break into pieces are trailers and RVs and they tend to wind up getting stuck beneath your truck after your smash them into pieces. Cars and school buses are dotted throughout each level but all you can do is drive over them and they don’t really crush beneath your mass so much as slowly melt into flatter cars and school buses. 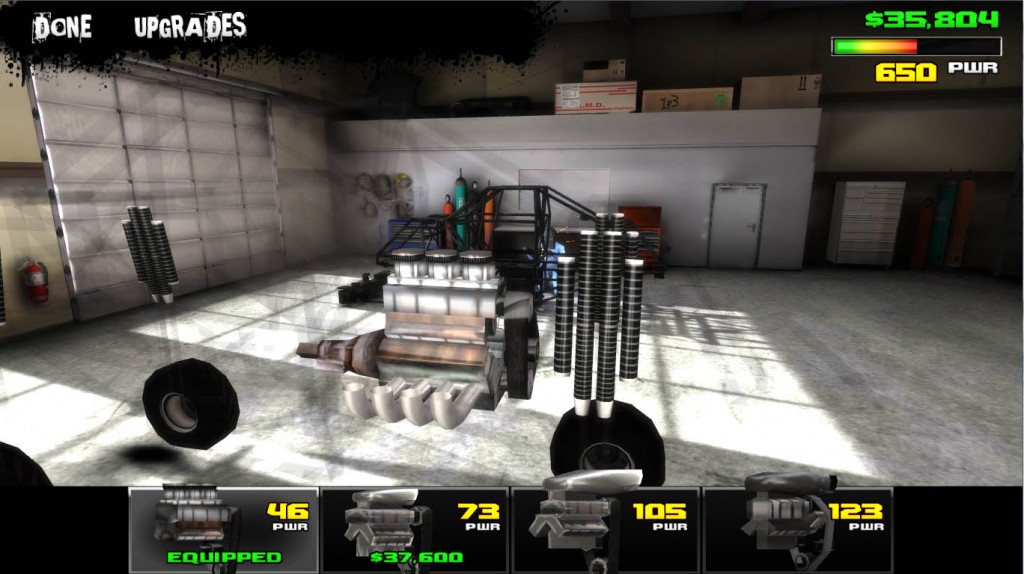 In between levels you’ll be taken to a garage where you are able to upgrade your vehicle. Upgrades are split into categories which admittedly doesn’t make a lot of sense to me. You can upgrade your engine, intake, transmission, shocks, and exhaust, but all any of these appear to do is increase your power level. Why split them out into categories if they all do the exact same thing? Nothing seemed to improve my traction or stability after jumping. Increasing the power level felt like it made no discernible difference in how the game played.

Because I wasn’t entirely convinced that upgrades were doing anything for me I composed a test. I took one of my upgraded trucks with a power level of 868 and ran it from one end of the track to the other. It clocked in at 4.57 seconds. I took another truck I had with a power level of 675 and was able to do the same run in 4.87 seconds. I don’t know that the extra .3 seconds were worth the hours it took to afford all the upgrades.

If you love monster trucks, and I mean really, really, love monster trucks then this game could potentially be for you. For me though the seams show too much on the port. I can literally think of no incentive to pay fifteen dollars to play this on a PC when you could boot it up on a cell phone for free.