Now what am I supposed to play on Xbox? - Enemy Slime
Enemy Slime

Now what am I supposed to play on Xbox?

A few more titles you may have missed

Last week’s announcement that South Park: The Stick of Truth will be delayed until 2014 has put me in a pretty dour mood. Looking at the 360’s lineup now there isn’t much of anything to look forward to for quite some time. But rather than take up a new hobby or needlessly devote my life to charity, I dusted off a few more titles that have come out over the years that might have gone overlooked. If you’re looking for something good to play on the 360 and don’t want to spend a lot of money in the meantime, here are a couple of options for you. 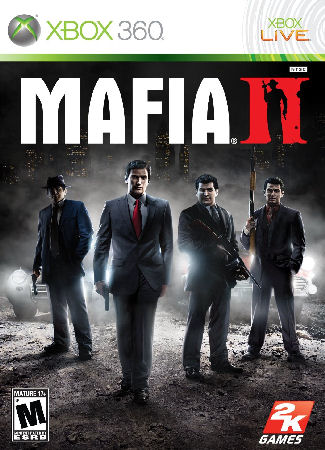 The original Mafia: The City of Lost Heaven is still rather beloved by a loyal cadre of fans, myself included. It’s sequel, simply titled Mafia II, did not receive the same warm reception when it released a few years back. But while it didn’t quite live up to the grandiose standards of the original, Mafia II is still a pretty enjoyable gaming experience. The game begins in the 1940s in the fictional American city of Empire Bay and you play as Vito Scaletta, an Italian immigrant who’s just come back from the war. Vito struggles to take care of his aging mother and his younger sister and in order to get them out of debt he falls back in with his old friend Joe, a small time gangster. From here the story follows your rise to power and the trials and setbacks you face along the way as you go from street hoodlum to dapper mafia trigger man. 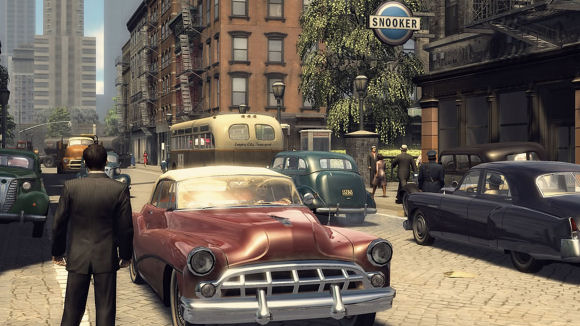 A setting rich with details adds greatly to the immersion

The gameplay is your standard carjackings and gunfights. Fans of GTA-style games will know the drill pretty thoroughly by this point and find the game handles pretty solidly. Vito can be an occasional spaz when trying to fire from cover, but he can shoot it out pretty smoothly and vehicles handle pretty well. So what does Mafia II do to stand out? Mainly in its recreation of 1940s and 50s America. If you have a fondness for period settings then this is the game for you – The neon cocktail signs downtown, the distinctive lines of art-deco auto design, the rock-and-roll and disc jockeys on the radio, it’s all there. There are some really good examples of how Czech 2K took their time to add depth to their setting, the most notable is a point where we go from a snow-covered wintery Empire Bay in the 1940s and skip ahead to summer in 1950s with all new cars, outfits and weather. 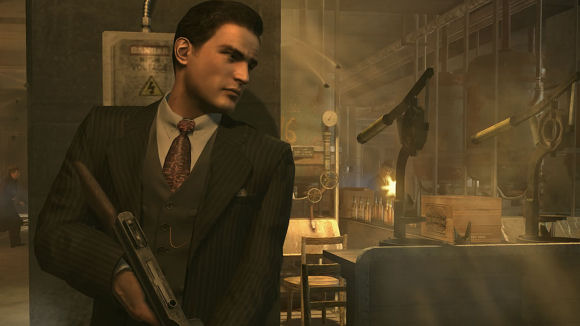 And lots of gunfights

The game isn’t perfect. Most notable is a lack of a free roam mode that feels more like a drastic oversight than design choice. The ending chapters of the game also feel a bit rushed and much of game’s charming immersion seems to fall to the side as the developers hurried to wrap up the game. Still, Mafia II plays well and tells a fun story and at ten bucks there’s plenty of good game to be had here.

Is it worth the money?: Definitely. While it lacks polish in a few areas that could have made it a truly standout title, we’re still talking about a very solid game here. While GTAV may have raised the bar for what we expect in these kind of games, Mafia II can be obtained for one sixth the price. Give it a shot, I think you’ll like it. 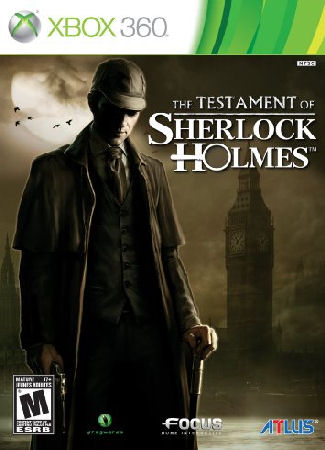 The Testament of Sherlock Holmes (Frogwares, 2012)

Another period piece, The Testament of Sherlock Holmes puts you in the role of Sir Arthur Conan Doyle’s beloved detective and his colleague Dr. Watson in the seventh title of Frogwares’ long-running series of Sherlock Holmes series. In this iteration Holmes sets out to solve a grizzly murder, all the while being accused of criminal deeds by a tabloid journalist. But the case runs deeper than just one murder and Holmes’ suspicious behavior comes to the point that even his dear Dr. Watson can not help but wonder… Could Holmes really be a criminal genius? 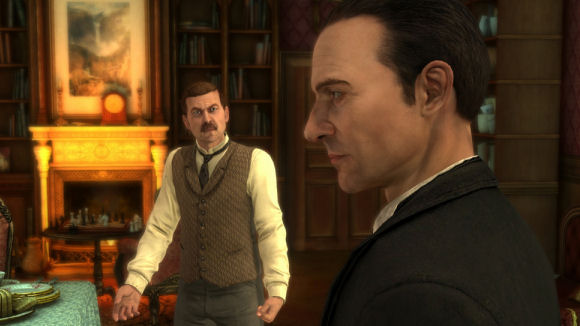 He’s dreadfully sorry, but he’s fed up, and he politely won’t have it anymore!

The Testament of Sherlock Holmes is an adventure game with heavy emphasis on investigation and puzzle solving. In this day and age the formula made seem a little dated, but this title has a few tricks to keep it fresh. In addition to the standard fare of finding the right item for the right situation, the game employs the deduction board which has you analyze clues at a crime scene to determine what took place. Finding the right evidence will present the player with with three possible deductions and requires you to use your own inferences to determine the correct answers. These sections aren’t always entirely intuitive, and indeed the whole game has an issue with clearly explaining what you are expected to do, but it is for the most part enjoyable and the deduction boards especially are the most engaging parts of the game. There are also many, many puzzles to solve, perhaps even a few too many. While each puzzle feels unique and is definitely challenging, there does come a point near the middle of the game where it feels like they’re just getting in the way of progress. Still, if you get past that section the game has a strong finish with just the right mix of challenge and story. 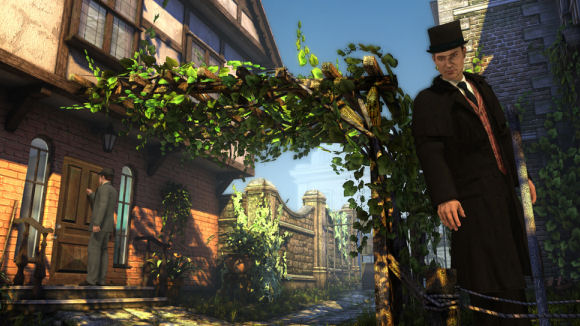 It’s nice to look at, too

This game is another great example of establishing a good setting in a historical period, and I really enjoyed seeing the details put into each area; from big settings like the destitute streets of Whitechapel to little things like the porcelain toast holder on the breakfast table in Holmes’ sitting room. I feel like I got my money’s worth just seeing the scenery. But much like the setting, puzzle games are somewhat relics of their own. While I enjoyed this title in spite of its issues, if you’ve never been a fan of puzzle adventure games this one probably won’t change your mind. However, if you are a fan, or ever have been fond of Frogwares’ series this is a very strong entry.

Is it worth the money?: If you think you would be interested for any of the reasons I listed above, then yes. This game hardly revolutionizes, but I still had a lot of fun with it. If you want to give your brain a good workout in a pretty enjoyable setting or just can’t wait for Crimes and Punishments to come out next year then I would say pick it up. 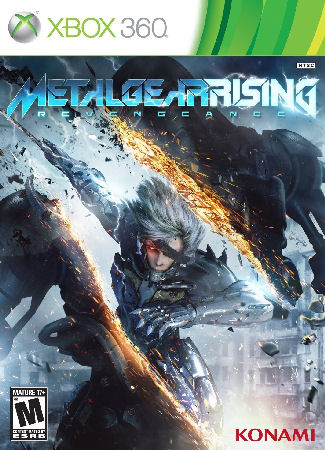 If you’re like me, the Metal Gear franchise ended with Guns of the Patriots, and it was not a happy ending. So when Jared recommended I consider including a sequential Metal Gear, let alone Revengeance, a title that seemed to further embrace so many of the issues I had with MGS4 (Like sword fighting with your feet) I was pretty skeptical. Yet, I’m happy to say that I was wrong about this one. Revengeance is actually pretty cool. It has a story, but forget about that. It’s not worth thinking about. You’re a cyborg ninja; you’re going to cut stuff up and do awesome feats of acrobatics while killing giant robots. Go have a blast! 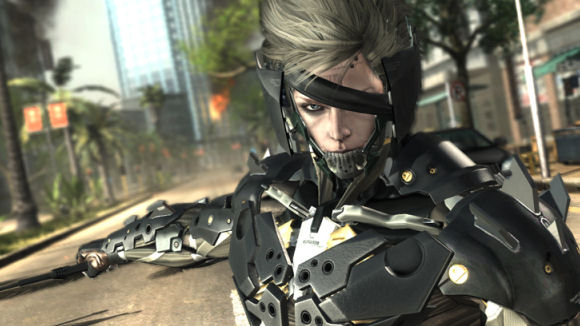 Yeah, we all know who he is. Just pretend it’s someone else.

Revengeance has you play as Raiden, the reviled protagonist of MGS2. He’s no more likeable or interesting in this incarnation, but again, you won’t be playing this game for its awful story. Instead, you will be using your sweet cyborg body and space age ninja sword to cut through droves and droves of enemies. Revengeance is all action; at any point in this game if you are not slicing foes into pieces or running from a gigantic explosion up a burning building then you must be playing it wrong. I’m not dipping into hyperbole when I say something is always dying or blowing up in this game and it is pretty awesome. Revengeance completely embraces its shallow and over-the-top nature and serves up an action experience that is incredibly satisfying. 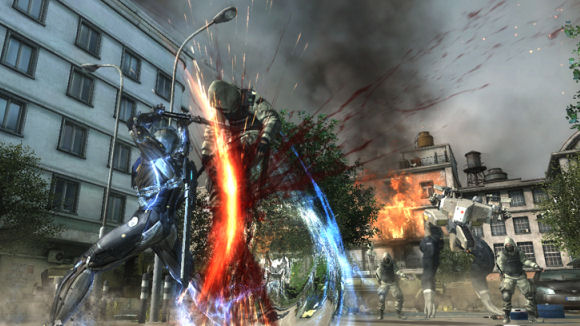 The one glaring, almost unforgivable aspect of this game is that while it’s not especially complex, its mechanics have enough components that you can’t ever hope to play the game without understanding them and Revengeance makes almost no effort to teach them to you. If you do pick up this title, do yourself a favor and Google “How to play Revengeance”. You will learn everything you need to know in five minutes and you’ll be reaping enemy spines and cutting helicopters in half in no time.

Is it worth the money?: Even if you are like me and feel pretty bitter about the direction this beloved franchise has gone in, pick this one up and forget it’s even a Metal Gear game. I don’t think you’ll regret it. My only word of caution is that the game only lasts about six hours, which isn’t the best dollar-to-gameplay ratio. Since the game can be beaten in an afternoon you might want to rent it or at least wait for the price to drop further.