Recent ESA Numbers Dispel Some Rumors About Demographics And Parents

Maybe AAA developers need to look at the stats published by their own trade group.

The ESA, (a trade group representing the video game industry), has released its Essential Facts About the Computer and Videogame Industry report for 2014. This report includes demographic and usage statistics for the past year and although it is an industry publication and must be taken with a grain of salt, it does have interesting information about who is playing, and also how the generation who grew up with videogames is interacting with their children. 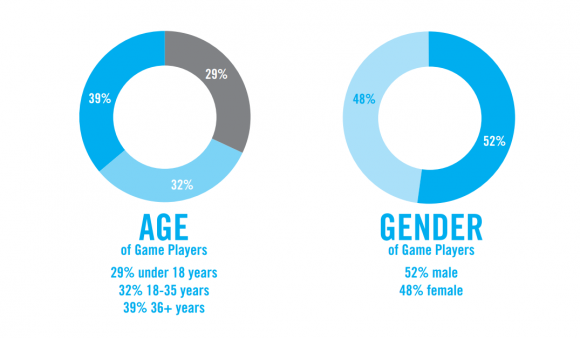 The biggest news, or at least the one that the report highlighted the most, is the increased participation of women among the gaming public. The ratio of men to women playing videogames is 52% to 48% respectively and perhaps more interesting is that game purchases are split 50/50 across both genders. Women 18 or older now represent a bigger demographic than men under 18 (36% over 17%), this is accompanied by an increase of 32% year over year in the number of female players over the age of 50. It is worth noticing that there is also an increase of 55% from 2012 to 2013 of social and puzzle games being played in mobile phones. It is clear that this increase in the gaming public isn’t coming from consoles and PCs, but from the growing mobile market. Of these mobile games, a whopping 77% fall under the category of puzzle games or casual/social games.

This doesn’t mean the console market is faltering. According to the numbers the “average” US household owns one “dedicated” machine, and at least 51% of households own at least two. The wording is a bit strange, since it doesn’t specify what the average household is, or what percentage of households that average represents (the use of the word average is also strange. Usually in a statistical context one would use the term “median” to refer to the typical household). While mobile and wireless devices increased 22% and 37% respectively, 68% of subjects are still playing on consoles. This is not likely to change. In fact it seems that mobile and smartphone gaming is complementing the traditional PC and consoles. It does not seem that the increase in mobile gaming time is cannibalizing these platforms, rather, it seems to come at a detriment to movies and television. Of the people interviewed 48% said they are watching less TV, 47% are going to the movies less, and 47% are watching fewer movies at home. For those who are tired of 12 year olds shooting you in the face while playing Call of Duty, there is hope. 88% of parents said that they use the ESRB rating systems when choosing games for their children, and 85% said they understand the ratings (which is an interesting variance in that 3%). 91% of them reported being present when their child is playing a game. 85% also said they find the tools included in modern machines helpful, and between 76%-85% of said they limit their children’s time with games, movies, internet, and Television. 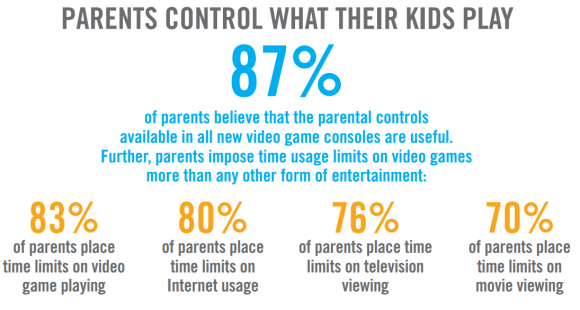 This is consistent with an upward trend we’ve seen in the past few years, and frankly not surprising. The average age of a gamer is now 31 years old, according to this report. This means that many of the people who grew up with video games are now parents, and it would make sense that they would be able to better use these tools when raising their kids. Parents also reported playing games with their kids monthly, 58% of them to be exact, and 47% play with them on a weekly basis. The top 5 reasons for this are:  Its family fun (88%), Because they are asked to by the child (84%), To socialize with their child (75%), to monitor content (61%), and because they like the game as much as their child (47%). It must be noted, that this data has been compiled by Ipsos, which is a well know and respected polling company. The data is analyzed by the industry trade group, who is likely somewhat biased in to how they want the data to be interpreted. Still, these numbers show that there is more nuance to the market than industry seems to recognize.