Retro in all the right ways.

What a pleasant surprise Shovel Knight was. I had actually never heard of the game or its wildly successful Kickstarter origins when I purchased it. I just saw a knight with a shovel getting lots of positive posts on the Miiverse and decided to check it out. 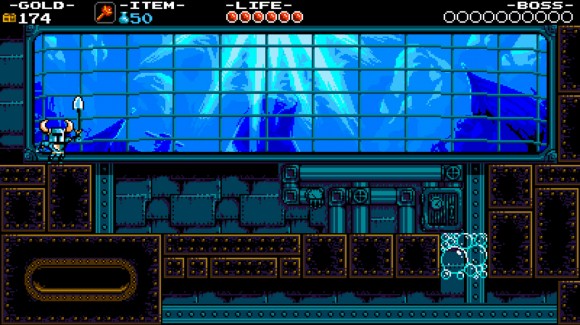 What I got was an action platformer in which you play as the titular Shovel Knight as he attempts to rescue his partner Shield Knight from an evil Enchantress and her group of 8 evil knights that call themselves the Order of No Quarter. The game plays out in a manner similar to Mega Man where each stage belongs to a specific knight and is meticulously balanced to kill you.

Shovel Knight is designed to look and feel like the kind of thing you would have purchased on a cartridge 20 years ago. Indie games cloaked in retro aesthetics is nothing new but I don’t think I’ve seen a title pull it off quite like this one. Everything from the graphics to the music feels like something that would have blended in perfectly with your original NES library. I mentioned the obvious Mega Man inspirations earlier but fans of the NES era will surely notice other elements lifted from games like Zelda 2, Super Mario Bros 3, and Duck Tales. Not a bad set of games to draw inspiration from. 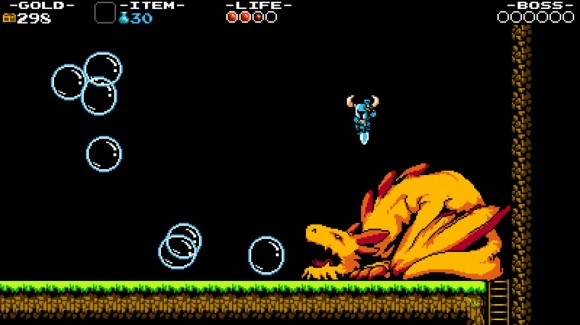 Shovel Knight’s primary weapon of choice is of course his shovel. As you battle enemies you can either swipe at them with a standard attack or hold the down arrow while jumping to do a pogo stick attack somewhat reminiscent of Uncle Scrooge’s cane jump in Duck Tales. You aren’t just limited to your shovel though, there are plenty of items and weapons (the game refers to both as relics) to be found that can dramatically change how combat plays out for you. I found myself particularly fond of the Chaos Sphere which would bounce around a level when thrown and sometimes damage enemies multiple times. A close second favorite is the Phase Locket which makes Shovel Knight briefly impervious to any damage (aside from falling into a pit). Some of the relics are necessary to complete the game but players can also finish the entire story mode without finding/purchasing some of them.

Shovel Knight’s upgrades aren’t just limited to items. You can also pay gold to upgrade everything from your health to your armor. Some of the cooler upgrades include a new shovel that will fire a burst of energy when you’re at full health, or a suit of armor that will halve the amount of money you lose upon death. But now I’m getting ahead of myself. 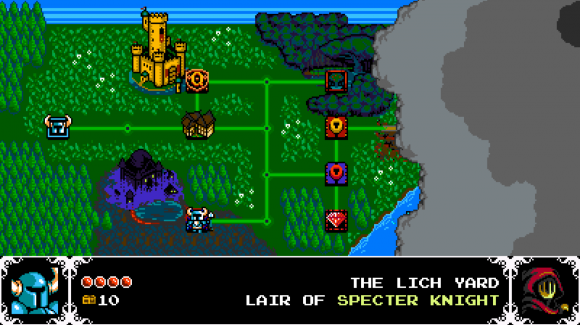 The game’s overworld is kind of reminiscent of Mario 3 and will let you choose the order in whic.

In true NES fashion the game is fairly brutal when it comes to difficulty. This is also the place where it draws some newer school sensibilities. When Shovel Knight dies he will also lose a chunk of cash. This money is split into three equal bags that will float around the level where you died. If you can make it back to the same spot in one piece you can collect the bags and move on with life. If you die on the way there however you will permanently lose whatever money was waiting for you and spawn three new bags to collect.

Checkpoints in the game are represented by glowing glass spheres. Particularly bold players can actually smash checkpoints and collect significant treasure bonuses. This of course also means that said players will not be able to respawn at that point should the worst happen. It’s a really cool mechanic and the way checkpoints are laid out in the game’s levels will quite possibly tempt players are normally averse to taking risks like that. 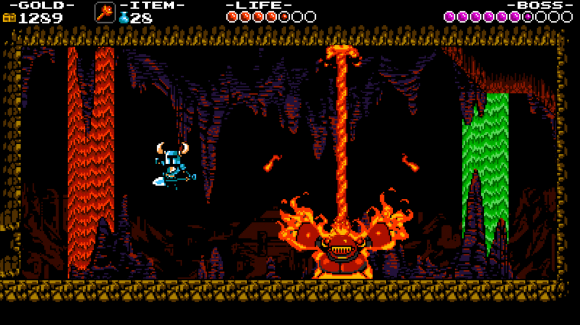 I’d be remiss if I didn’t spend a little more time on the game’s excellently designed bosses. Each member of the Order of No Quarter has their own unique look and feel. There’s the big hulking Nordic giant that is Polar Knight, the conversely itty bitty Tinker Knight who relies more on giant machines to take you down, or my favorite, the fancy duelist with a helicopter on his head, Propeller Knight. Each enemy’s stage is themed appropriately; Specter Knight’s level has you working your way through a graveyard, while the dive suit wearing Treasure Knight will be sending you through a sunken ship.

While I was toppling the game’s creative bosses or finally triumphing over a particularly punishing level, Shovel Knight definitely became one of my favorite games I’ve played this year. If you’re looking for an old school NES-esque experience I can very sincerely say nobody does it better.