Who's up for smashing some bros?

A new generation of Nintendo consoles has graced our lives, and as of 1999 that means we’re due for a new Smash Bros. title. Most players are likely already familiar with the party fighting game that mixes up dozens of famous faces from across Nintendo franchises and recognizable video game mascots from other outside sources. 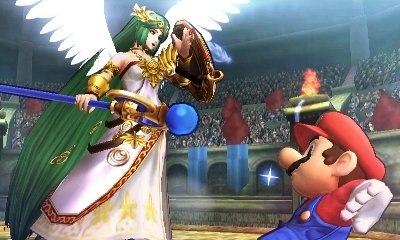 If you’re new to Smash, which isn’t likely, the rules are simple. You compete on hovering 2.5D platforms surrounded by an endless abyss, and your goal is to knock your opponents into said oblivion. You do this by raising their damage percentages, with a 0% meaning you probably won’t knock them very far, and 300% guaranteeing victory. Combat is simple, your normal attacks are assigned to the A button and can be charged up for stronger attacks, while each character’s special moves is assigned to the B button and a different direction. You can use a shield, you can dodge, and you can use items to try and swing the battle in your favor.

Even after four installments in the series, the core gameplay hasn’t changed very much. Melee added some (arguably unintentional) techniques to its combat, while Brawl removed many of Melee’s game “quirks” and added “fun and unique” features such as random tripping. With its past in consideration Super Smash Bros. is probably the most cleaned up of the franchise, addressing both the glitches in Melee and decidedly unfun happenings of Brawl and bringing you back to some of that traditional Smash gameplay. 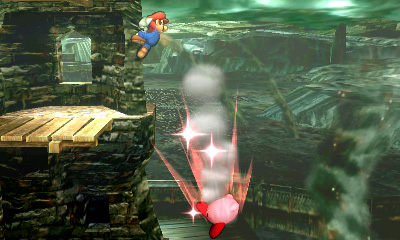 Most of the problems I have with the game come entirely from the initial platform of choice, the Nintendo 3DS. Trying to play the game on a handheld presents a unique set of issues. For some the controls are flat out uncomfortable, and although you can adjust them a little, you may still find it awkward. If you’re playing on an older model 3DS and not the XL like I did then the tiny screen definitely takes some getting used to, and the black outlines don’t seem to help as much as head developer Sakurai and co seem to hope for. Finally you have to be real careful with that circle pad, the power of a smash usually comes from the power of hitting the directional stick, go a little too hard and you risk breaking your pad entirely. I also found the frantic, frenetic action fairly unplayable with 3D turned on.

While the 3DS definitely makes things awkward that doesn’t mean you can’t get used to it or that you should avoid it entirely. After my first day with the game I did manage to get acquainted with everything that was throwing me, from ant sized characters to squished controls. This is just something to note if you have your eyes on the Wii U version and are waiting for much higher definition graphics and a better control scheme.

My largest problem with this title’s predecessor, Brawl, was that it felt like once you unlocked all the secret characters; a task made easy with the decidedly miserable story mode Sub Space Emissary, there was nothing left to do. Paired with poor internet connectivity and the fact no one really owned a Wii and therefore couldn’t compete with you locally, meant I had placed my copy of Brawl in mothballs after literally a week of play. 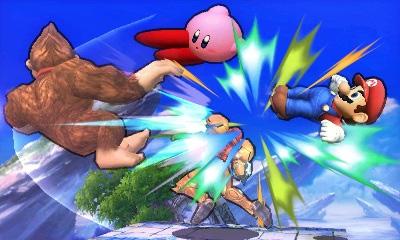 Super Smash Bros. gives you a lot more to do than just collect trophies and characters this time around. First off it’s loaded with a lot more gameplay modes. There’s Smash Run, a 3DS exclusive mode which is similar to the labyrinth in Sub-Space, but without the insane difficulty and bizarre story, rather you just have to race through the maze and boost your stats as much as possible in five minutes before your new skills are tested against either AI or human opponents in one of many challenges. Your final confrontation could be anything from a race to the top of a level, to a Smash where you have to tear down the other’s stamina like you would in formal fighting games.

Classic mode is a bit of an odd bird. You’re set to a default intensity of “2”, with raising or lowering the difficulty tied to the amount of money you’re willing to spend. All Star Mode is clever in that it has you rip through fighters according to the year their games were released, though this does get a little monotonous after a few runs. You can buy trophies in a shop, or go for the Trophy Rush which lets you pay cash for time, and time allows you to smash open boxes for the sake of trying to trigger a “fever rush” that will rain many prizes down upon you. Finding all of these modes presents its own problems. Menus are fairly unintuitive and tricky to navigate; you could spend a day alone trying to figure out where every game mode is hidden. 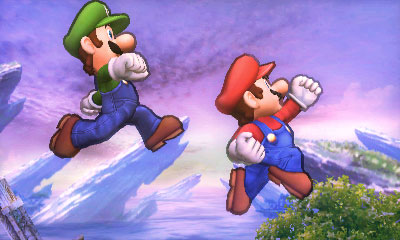 The new fighters on the roster are both interesting and in many cases, complex. Some of them do feel a little out of place with how they play, characters like Wii Fit Trainer, Robin, and Shulk all have their own unique quirks and sometimes they feel just a little too creative for their own good. For example Shulk’s game, Xenoblade, was very reliant on buffing your characters to make it through fights. Shulk in Smash also strongly relies on buffs, which you cycle through with the B button, the buffs always cycle in the same order, but advanced players are likely going to have to memorize their order to minimize downtime during a fight. Wii Fit trainer also has skills you need to carefully time to get the most out of her, in tune with Wii Fit wanting you to hold positions for a certain number of seconds. My feelings are a bit mixed on the new cast, while I feel they capture the spirits of their respective games, a little “dumbing down” may fit the Smash atmosphere a bit more. Though again if you’re determined to learn a fighter this shouldn’t get in your way too much.

The best aspect of this new title has got to be character customization. Everyone in the roster gets up to two variations on their default special abilities, while the Mii fighters and Palutena come packed with a far more variable set of skills for more detailed custom options. You can also find equipment, which will manipulate one of three stats, Attack, Speed and Defense, at a price. So while I was able to go ahead and beef up my Zero Suit Samus with 22 Attack and 50 Speed, it came at the cost of 35 Defense, meaning getting her out the ring is a pretty simple task…. If you can catch her. In Smash Run you can also gear up your characters with special abilities only usable on the run, from calling down a series of meteors, summoning items, or healing yourself. 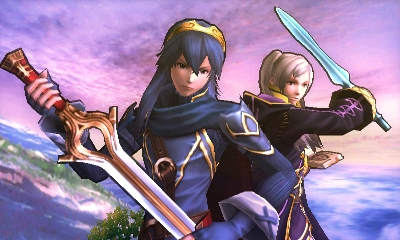 The only caveat is that with the exception of Palutena and Mii, each character’s special abilities are hidden throughout the several modes. The easiest way to collect special skills is on either the Smash Run or in higher levels of Classic mode, the latter of which involves of roulette wheel that cycles between cash, trophies, and the many custom parts you can get. Equipment, special skills and powers all share the same spot on the roulette wheel and in the bags you can pick up in Smash Run, so there’s no guarantee you’ll get that explosive egg attack you direly need for Yoshi and you might just get a Mii hat instead. Further the skills are relatively randomized, I found that while taking my main fighters on Classic runs was more likely to net them their specified abilities, often times I would pick something up for any of the roster’s 40 fighters, a few  of which I never had any intention of using. It’s also possible to get repeat abilities, I must have seen Samus’ Lateral Kick a half dozen times before I finally picked up a new skill for her.

All of this translates into it taking a very long time to farm all the gear, special skills and mii hats you’ll need to fully customize the fighters you want. God Speed if you intend to fully load out the entire roster. The game also comes with challenges to tackle, though I promise if you actively go after them you’ll be done with all the challenges the game has to offer in a few hours. Doing challenges unlocks stages, skills and, woohoo more hats, but is ultimately nothing to fret about. There is a little cheat for Classic mode to make skill collection just a might easier, though it’s not an intentional part of the game which means the basic design artificially extends the game’s life span by quite a lot. While most time sinks make me roll my eyes, I do find there is honest fun in detailing my characters and taking them through the varied game modes and, player willing, into online matches.

Online feels like a mixed bag with this title. In Brawl, online was basically unplayable, with an incredible amount of lag always present. I’ve found 3DS to be much more of a mixed bag, some matches ran smooth as butter, others were rife with sputtering seizures that would see players lock up every other second. I’ve also played several matches against Jared, and we found that for the best chances of a playable match we had to turn off all items, pick graphically light stages, and set them to “final destination mode” (which turns each level into a flat floating platform), essentially we had to turn off everything that makes Smash Bros. Smash Bros. It’s not exactly the most fun I’ve had with the game, but every now and then I did find myself in a particularly awesome online match.

You can also spectate online matches and, if you have a gambling habit, bet on the player you think most likely to win based on their own stats and prior win record. My first night out I won an easy 600 gold, but turned in my chips before I could be hit by that Fred Flintstone b…b… betting bug (I bet 75% of our readers don’t even get this reference). There’s also a “Conquest Mode”, which is a global ranking “who would win in a fight” style one on one, or one on one on one as this week’s match shows, that depends on the players to rocket their favorite fighter into the top percentile and knock the opposing fighter out of the rankings. 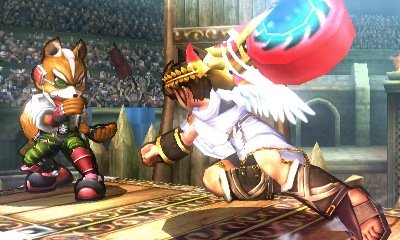 While it’s not perfect I do find myself having a ton of fun with Super Smash Bros., especially when it gets down to customizing my fighters. The Miis have perhaps surprised me in being among my favorite brawlers just because of how thoroughly I can tweak their skills and abilities. Even without the artificial extension of the game with skill collection, I believe it will have a longer shelf life than its predecessor, though that’s largely up to the fandom and tournament communities to decide. It will be interesting to see what kind of Wii U connectivity it has and what the Wii U will offer in terms of special stages and any unique modes, such as Smash Run. Overall it just feels more fun than Brawl did, with a lot more to do, and for these reasons I can get over my grievances with the game fairly easily and score it a 4.