A dungeon crawler filled with enough fan-service to tide you over until Persona 5.

Have you ever wanted to play Persona without all of the social link and relationship aspects? No, because that is what makes the franchise unique? Well, Atlus suspects you might feel otherwise, and has set out to prove it with the release of Persona Q: Shadow of the Labyrinth, a dungeon crawler reminiscent of Etrian Odyssey, Paper Sorcerer, or Might and Magic starring the casts from both Persona 3 and 4. After two remakes of Persona 3, one remake of Persona 4, two fighting games, two anime series’, three anime movies, and two mobile games, it is becoming evident that Atlus is trying to squeeze every drop of revenue from the PS2 generation of Persona. Despite being Enemy Slime’s biggest Persona fan this side of the Mason-Dixon line, I have to wonder if at some point the sheer amount of Persona content being released will start to affect the quality of the franchise. Luckily, Persona Q is not the game that marks that dip, as it is a fantastic dungeon crawler filled to the brim with fan-service. 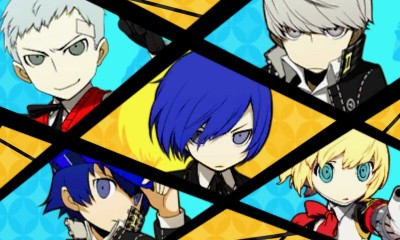 Persona Q takes place outside of the canon of the persona series. In this universe, circumstance has brought the groups from the two games together in a shadow infested imitation of Yashogami high that is located neither in Tartarus from Persona 3 or the TV world from Persona 4. Here they meet Rin and Zen, a mysterious child and guardian who have no memories and are stuck in this strange realm.This version of the highschool seems to be perpetually stuck in the Culture Festival, an annual occurrence in Japanese Schools where students show off class displays for the rest of the school. These displays serve as labyrinthine shadow filled mazes that the characters must progress through in order to discover where they are, why they have been brought together from their respective times (the Persona 3 and 4 teams come from 2009 and 2011 respectively) and figure out how this ties into the mysterious disappearance of Igor, the enigmatic master of the Velvet Room.

The bulk of the game play takes place in the labyrinth. Here you must explore, trying to find the exit to the next floor while fighting shadows. Movement works in first person, with each press of the button moving you a square forward. This system is in place to help you map the places you have been to, which require you to draw them manually on the touch screen. This mechanic did get a bit tedious after a few floors, and I found that my experience was greatly improved once I turned the auto-map feature on. There is still plenty to use the touch screen for even if you choose to utilize the auto-map. You can mark the locations of secret passages, specials areas of interest, places to avoid, etc… having a good map is key to successfully navigating the labyrinth and finding the exit. 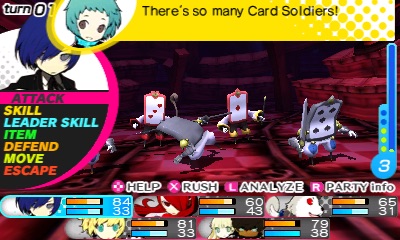 The combat system is familiar. You have a party of five characters pulled from the roster of the characters from Persona 3 and 4 and the previously mentioned newcomers Rin and Zen, who work as one character with Zen taking care of the physical attacks and Rin taking the healing duties. There is a curve ball thrown in for veterans of the games, as the way personas work has changed. The main characters can no longer equip multiple personas at a time. They are stuck with their starting personas for the whole game. Instead, the whole team is allowed to equip one additional persona in addition to their own, which means they are able to get additional spells, resistances, etc… even Fuuka and Rise, the navigators, can equip personas which will reveal some things about the map. This gives you a bit more freedom to choose who you will take in your party, since you are no longer bound by the spells they will get with their main persona.

The Persona series in general has a reputation for being on the easier side of the Shin Megami Tensei series, and Persona Q is about on par with the difficulty players would expect from the series. Make no mistake, this is still a Shin Megami Tensei game. While it is possible to punch above your level by fusing the right personas, you can also be easily wiped out by weak, regular enemies if you are not careful. To make up for the absence of Social Links, Persona Q features a series of very strong shadows on every floor known as FOE’s. These enemies are usually on par with the boss of the dungeon in strength and drop strong personas and rare items upon defeat. Beating these enemies is no easy task, they are very strong when you first meet them, and the game also features puzzles that revolve around them. 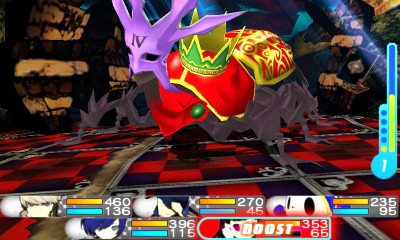 When you are not exploring the labyrinth, you can explore the culture festival, go to the velvet room to fuse personas, go to the nurse’s room to heal, and purchase items and equipment. You acquire money and unlock equipment by selling pieces of the shadows you defeat in the labyrinth. These funds are then used to buy the equipment you’ve unlocked, and to heal. Healing and equipment get more and more expensive as the game goes on. This means that any grinding I’ve done has been economic rather than with the aim to gain levels. It feels a little cheap to have to grind to do something as simple as heal.

The best part of the game is watching the parties from both games interacting. The writing for the characters is still top notch. Characters behave like themselves and the team dynamics and interactions between them feel genuine. We have seen the casts interact before in Persona 4 Arena and its sequel, but this is the first time you see them as equals, rather than having the Persona 3 team as much more experienced adults. There are also great nods to the continuity between the two games, and plenty of references to things that happen in both games, and even other Atlus titles. Despite the cutesy graphics, the plot has a somewhat dark tone closer to Persona 3 than 4. As great as it is for fans like myself, I can’t imagine that someone who skipped one of the games, or is a new-comer to the franchise will have the same kind of experience. 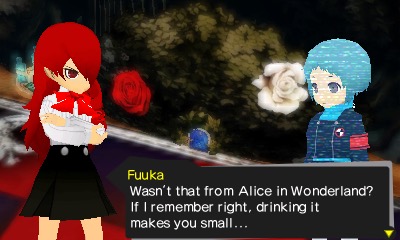 Persona Q: Shadow of the Labyrinth could be considered persona light. It removes a lot of the social aspects of the franchise, but the changes in the mechanics work to make a great dungeon crawler that is just familiar enough to be easy to pick for persona veterans, while different enough to keep them entertained. The plot, difficulty puts Persona Q alongside the other RPG’s of the franchise as a game that can easily reach 60 hours of game play. Despite this, I am not sure how much mileage you will get out of Persona Q if you have skipped one of the previous entries or are a new-comer to the franchise. It is a good dungeon crawler, but a lot of its charm will be completely lost. If you are a fan of the series and you have a 3DS, I would say this is a great title to add to your collection.