Get me off this planet!

I feel like just about every gamer who grew up in the SNES era must have at least some lingering fondness for RPGs. While Chrono Trigger and Final Fantasy may not have been your go-to titles, few genres from that era, or any other, seem to invoke so much nostalgia as a classic JRPG. And while the stirring fanfare of Frog’s Theme still sends chills up my spine, perhaps you may prefer the groovy, and possibly copyright-infringing battle jam of EarthBound’s Franky Fly. If so, Eden Studios had you in mind when they dreamed up Citizens of Earth. A modern day RPG set right here on titular Earth, CoE strives to capture a little bit of the magic of 16-bit RPGs with modern trimmings. Unfortunately, despite a sincere effort, you might find that you can’t go home again… 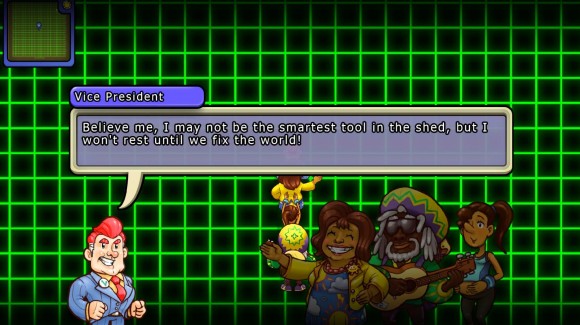 Citizens of Earth puts you in the role of the newly-elected Vice President of Earth taking some much-deserved R&R after winning the big election. But something’s amiss, the people have risen up to protest against their new second-in-command. Determined to find out what’s going on, you set out on a quest that will have you venturing across the globe to solve the mystery of missing coffee shops, presidential kidnappings and hyperactive kids as you assemble everyday citizens to help you fight a sinister menace that has set the world in panic, all while trying to a set aside a little time to yourself.

One of the first things you’ll notice about Citizens of Earth is how reminiscent it is of cult classic SNES RPG EarthBound. In case you were wondering, this is no accident. This game really, really wants to remind you of how much you love EarthBound. And if you do that’s great, but when a game’s big selling point is reminding you how much you liked another game, you’re might be getting just what you expect. I’ve always had a soft spot for EarthBound’s quirky, offbeat style and humor, but CoE is imitation verging on misappropriation. While the game does try to put a new twist on the setting, what you have is a game that has generously helped itself to another property and doesn’t necessarily offer anything to match. 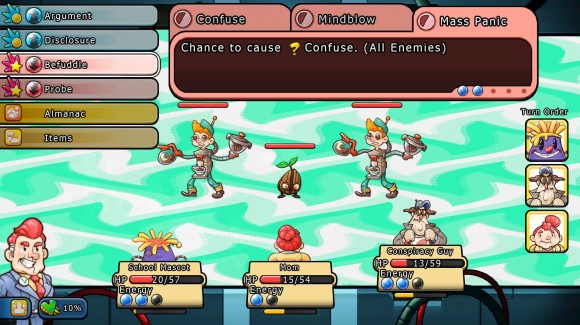 Citizens of Earth starts you out with a party consisting of your loving family, but it’s a big world out there with a lot of constituents to meet and recruit to your cause. You will enlist the help of bakers, teachers, policewomen, baristas, farmers, conspiracy theorists and many more (40 citizens in total, I believe). In fact, a substantial amount of the game outside of the main quest is recruiting all these citizens. Most of them have a challenge for you to perform before they’ll sign on. Sometimes these challenges will be unique and cool, like a rhythm game, or my favorite, the Used Car Salesman who challenges you to a race where you get into RPG fights with your car. Unfortunately a lot of them consist of tedious fetch quests or have you tracking down scattered points across the game’s open world map. Recruitment tends to be pretty hit or miss, though you can play through the game only recruiting a very small handful of characters without any real repercussions.

The battle system feels familiar for anyone who’s played their share of 16-bit RPGs, but with some notable differences. Foremost, the VP does not fight. Or contribute. He stands on the sidelines and lets others fight. This is kind of a cute setup for how the game plays out. Your  allies will do your fighting for you and none of them have a generic “Attack” command, but rather each citizen has unique skills with different benefits and sometimes disadvantages. Your Mother has attacks which reprimand enemies and debuffs their defense, while the School Mascot has a strong attack that hits all enemies but ricochets a part of that damage back to himself. I give CoE credit for how varied these abilities are between citizens and I feel like there’s a lot of opportunity for mixing and matching strengths and weaknesses to create an optimal party. However,  the game starts you with two of the most robust characters in the whole game, and while you might do a little experimenting with every character I found it far easier to just select my base three and play through. This is reinforced by that fact that characters you aren’t using don’t gain experience, so if you leave the Plumber at home and go through a dungeon with the Firefighter she’ll be at level 20 while the poor Plumber will still be stuck at level 4. The game does offer some encouragement to keep your party well-rounded, as some characters also have talents which can be used outside of combat and increase with level. These talents range from extremely useful to truly bizarre; the Pilot, for example, can fly you around the map from location to location and as her talents increase she has access to more locations, while the Beekeeper oddly can increase or decrease how closely the camera is zoomed in. 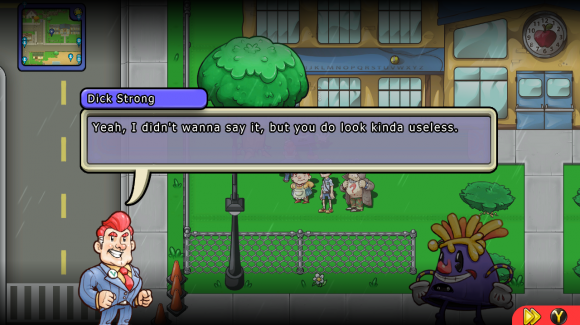 Except that you’re looking at the most unstoppable killing machine in the whole game.

Despite the game offering you incentives to advance all your party members, I found it a lot easier to live without helicopter rides than purposely level up the Pilot, or most any of the other characters’ talents. The biggest reason for my indifference is that because as the game progresses the frequency of battles shoots way up, way past the point of being tedious, and it never felt worth the extra time and effort to go out of my way to level up the Gardener so that I could cut down bigger weeds. A lot of the characters seem to have interesting abilities, but there’s too many to level them all and the game isn’t long enough to put them all to use.

Citizens of Earth isn’t all missed opportunities, however. The production values on this game are definitely the star of the show. The art style has a warm, cartoony feel which matches the tone just right, with a slight Mad Magazine look that seems very appropriate for the genre. The soundtrack also feels mostly dead on; there are a few areas which are mind-numbingly annoying, but for the most part the tracks really nail the EarthBound style. The game also enjoys a pretty substantial amount of voice acting through most scenes, the notable exception being in combat where each character only possesses two or three lines which get repeated ad nauseam, getting very tired very quickly. Lastly, while I feel like this may be an homage to the mild-mannered standards of games CoE is trying so hard to emulate, the humor is super squeaky clean, to the point that you might feel like even a Laffy Taffy wrapper might come off as too risque on this title. 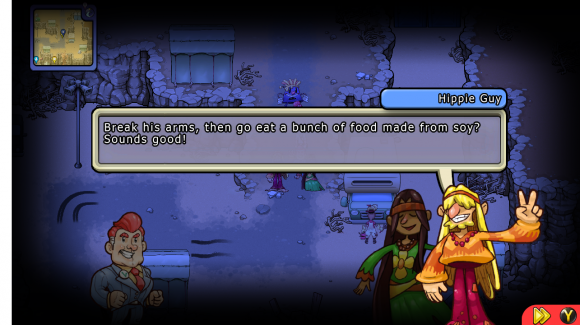 Finally, I really need to address some performance issues I encountered playing on the PC. Citizens of Earth crashed a lot. To the point that I think if averaged out for the 17 odd hours of playtime I probably experienced an average of one crash, unrecoverable freeze or just simply found my party stuck behind some object every hour. Especially when changing maps I seemed to see lots of slow downs, graphical glitches and crashes. The game autosaves in between each map, so this isn’t generally a big deal, but it makes the game feel pretty rough in this aspect. My fellow editors report similar issues in lesser frequency, especially on the WiiU, to the point that we would recommend avoiding either the PC or WiiU versions all together. 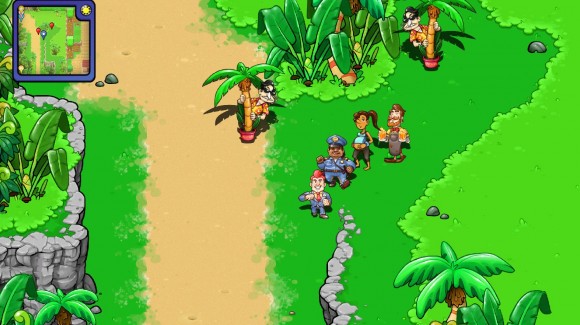 When I set down Citizens of Earth I mostly felt glad to be done with it. The unapologetic EarthBound copying didn’t really win me over enough to warrant the unbalanced, buggy and honestly phoned-in feel that seems to creep into too many aspects of this title. Even still, though I don’t think I liked this tile very much, it has a goofy, we-tried-and-failed charm that comes from a game where you can tell it was a labor of love even if the end result was less than great. I had a hard time finding anything positive to say about it, but yet somehow I didn’t exactly hate it, it just feels like a title that could have been a lot more than it turned out to be. It’s cute and novel in some ways, with a few charming surprises and if the art style and promise of a slightly off-the-mark EarthBound imitation really get you excited then you might be able to get something out for Citizens of Earth. Otherwise, I say skip it. 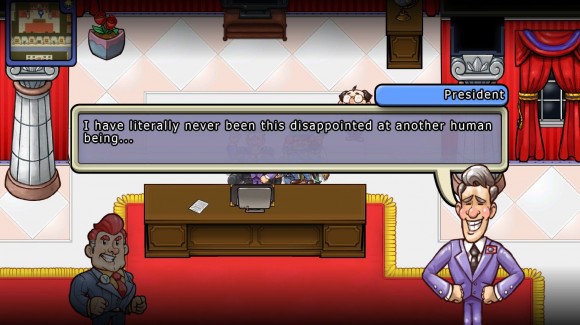 Review: Galaxy of Pen and Paper