An incredibly unique experience occasionally held back by its unusual control scheme.

When you play Nippon Ichi’s htoL#NiQ: The Firefly Diary prepare to die, a lot.

Also called Hotaru no Nikki, and directed by Masayuki Furuya, this title thrusts you into the roles of two fireflies: Lumen, and Umbra, as they try to guide a young girl named Mion through the underground remains of a long dead world to its surface. Along the way they’ll help her avoid death traps and the creatures of shadow that are out to rip her soul asunder. 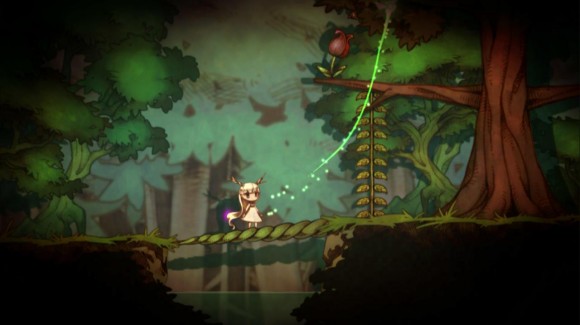 It’s Ico meets Lemmings in a sense, you have no direct control over Mion but her safety is your number one priority. She starts the game with some fairly limited actions, she can push boxes that Lumen points out to her, and since she’s a child she’ll be easily distracted, by detours such as a cute stuffed rabbit or a trap that captures her curiosity. Not entirely dim, Mion will sometimes act in limited ways without player input, such as running to safety. Though most times it’s entirely in your hands.

Controlling Lumen, Umbra, and when the game allows, Mion, is done entirely via the use of the front and rear touch screens of the Vita. The front screen will position Lumen, and Mion will dutifully follow the green firefly wherever it goes, climb or descend ladders, and push boxes. Beware just where you put Lumen however, as Mion can and will follow the Firefly right off a ledge and to her inevitable plummet. Umbra meanwhile moves through the world of shadows, and can only move through anything that’s silhouetted. Time will thankfully freeze around Umbra, and this is important because the purple firefly is often needed to manipulate objects for Mion and Lumen to progress. 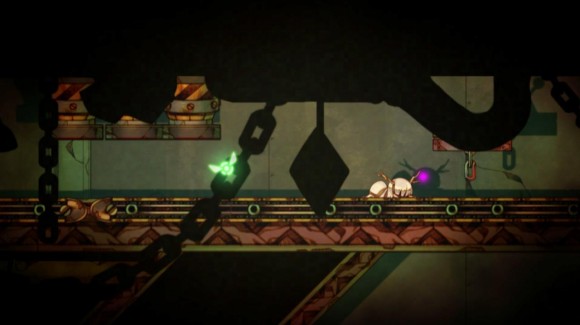 While the controls are inspired, they leave a lot to be desired. There’s basically three ways the game handles “kinda wonky, wonky, and very wonky.” As Lumen it’s sometimes a little difficult to tap things quite right, and one slip of the finger will send the firefly off in a direction you don’t want Mion to go. I’ve definitely sent Mion on an inevitable path to her doom once or twice with an accidental flick of the screen, though have always managed to avoid it last minute by sending Lumen elsewhere. Umbra is a bit worse, with thin lines and wires she’ll have to navigate, wrestling with Umbra via the rear touchscreen could get frustrating, though thankfully controlling Umbra also meant freezing time, and as long as I didn’t accidentally tap back into the ‘World of Light’ I could grit my teeth and sort my way through the technical difficulties of the shadow world.

Finally there’s Mion’s “Memories”, a top down isometric view reminiscent of an RPG, where you get hints as to Mion’s life in the before time, during the long long ago. While the memories of her former life were often a safe place to navigate, without any serious pitfalls, there would be a small puzzle to solve or a place to reach that felt more frustrating than it should have, simply because the touch controls made Mion slow and unresponsive. There are unfortunately no options to switch controls to the directional pad or analog sticks (why not the two different analogs for the two different fairies?) I don’t want to say the controls are game breaking, but they could sometimes make the game more frustrating than it needed to be, and I take it unintentionally so. 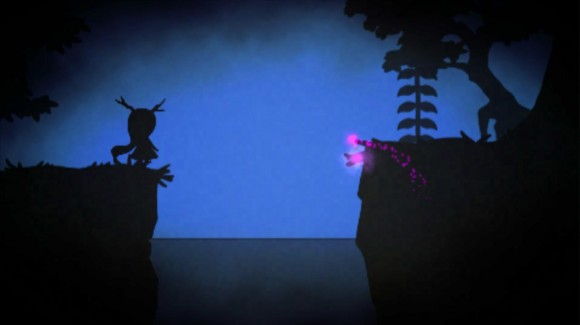 The game asks you to pay careful attention to light and shadow, down to recognizing the placement of shadow enemies and where you can bait them into moving in order to have Umbra both drop an object on them and open up a path for Mion. The game is smart in how it trains you, and a bit punishing, as constant trial and error and watching Mion’s terrified eyes as she dies yet again will spur you to do better next round. You’ll be playing with fire, as solving a puzzle will sometimes require you put Mion directly in danger, with at least one instance early on where you must let a monster get its mitts on her and nearly bite her head off in order to properly solve the puzzle and proceed to the next area. I won’t say it’s adrenaline pumping, but it is tense. Thankfully the game is generous with checkpoints, so though it’s a little vindictive you will never lose a ton of progress.

It has a disturbing atmosphere on the level of Binding of Isaac or Silent Hill without needing to use the gore or violence of aforementioned games. It’s the implications that are bad enough on their own, with twisted shadow enemies that seem plucked from the mind of H.P. Lovecraft, the innocent toys and iconography of childhood strewn throughout the levels of rusted machines and dying factories. It definitely draws you in right away with a question of “what happened here?” You want to know more as you try and get Mion to the surface and look for the fragments of her memories. 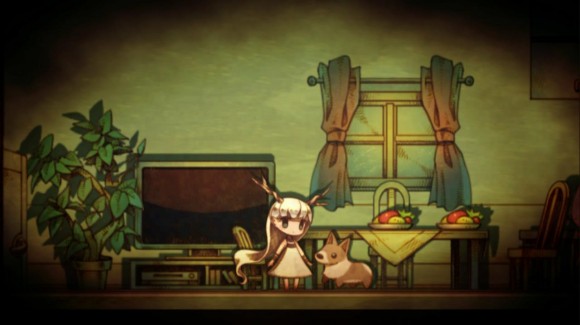 The story is told in two ways. Through the game’s atmosphere, and via little plants called “Memory Fragments.” A lot of the plot is received via the fragments, for the most part they’re both entirely optional and entirely miss-able, though thankfully you have the choice of going back to different levels to try at a second attempt at recovering each fragment. You’ll extract the rest of the story via the in-game environments you traverse and their several inferences, the observations you make as the player are pretty key to working out what’s happened in this world. For example, you may notice a few levels carry Mion’s favorite things, such as her prized stuffed rabbit, making a note of little touches like this is important to discerning the overall plot. It’s difficult to actually talk about the story without spoiling it, so I won’t go too much deeper than what I already mentioned. Just know that it follows a very Silent Hill or Dark Souls style of story telling.

This is perhaps one of the most unique games I’ve ever played. It helps that the Vita’s back touchpad is relatively new tech, though it’s also imperfect tech, and that reflects off the game poorly. Puzzles tended to be difficult in both a good sense and a bad sense, when you died due to player fault, not paying attention to a puzzle or enemy, it feels more rewarding when you finally overcome it. When you die due to the controls or slow reaction times of the characters, it’s far more blood boiling because you know you could have passed it with tighter design. Ultimately a strong atmosphere, well designed puzzles and some unique art direction won me over. If you’re looking for a fresh, portable experience and enjoy puzzle platforms Firefly Diary may be the game for you, just be warned that if you dive into this game on the Vita you’ll at times have to contend with a few heavy touch screen frustrations.