Interesting concept, but let's all lower our expectations.

Do you remember when Final Fantasy XV was supposed to be a companion game to Final Fantasy XIII? Oh Yeah, this game has been in development for a long time.  Since 2006 in fact, and it was supposed to be one of three games released as a part of the Final Fantasy XIII story, along with Type-0, under its original title Final Fantasy Versus XIII. After the game continued to be delayed, showing only the odd trailer and piece of concept art for years, and following the cold reception of fans to the XIII trilogy, Square Enix decided to re-brand the title, and simply make it the next numbered entry into the series. While this is a move that might sound significant, there isn’t much of an impact to being a numbered entry, especially when you consider two of them are MMOs. It’s also a move that was most certainly made to distance it from the poorly received XIII trilogy. Despite its troubled development cycle I was excited to see a demo being released with Type-0 as it would provide a brief glimmer at just what Square-Enix was going to do with their biggest and perhaps most mishandled franchise. And sure enough, I wasn’t surprised to find that despite having some good ideas, the design of Final Fantasy XV seems to follow conventions JRPG’s largely abandoned by the mid 2000’s. 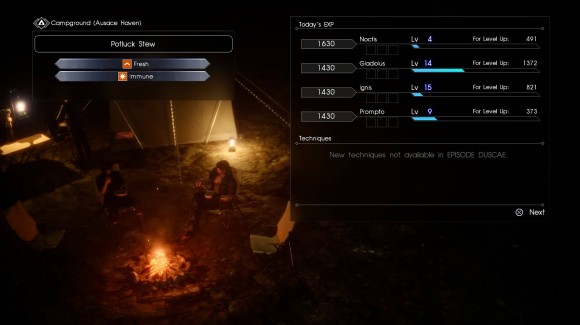 The Road Trip theme is intresting

The game opens with the four main characters: Noctis, a crown prince with mysterious power and the character the player controls; Gladilous, Noctis’ body-guard/older brother figure; Ignus, a tactician and mage of the group; and Prompto, who appears to be of a lower standing than the rest of the characters, but still a friend to Noctis. They are camping out in the wilderness, stranded as their car has broken down. If you were hoping to ride the car that was emphasized so much in the trailers, you will be disappointed. Instead your mission will be to raise money to pay for its repairs. Luckily, this mundane task can be accomplished by tracking and defeating a particularly nasty Behemoth known as Deadeye. There is very much a sense that you are jumping in the middle of the story and as a result it’s hard to tell if the characters are well written or not. First impressions were good however. At some points the game really felt like it was four friends going camping, but there was still an appropriate distance and reverence towards his highness Noctis. 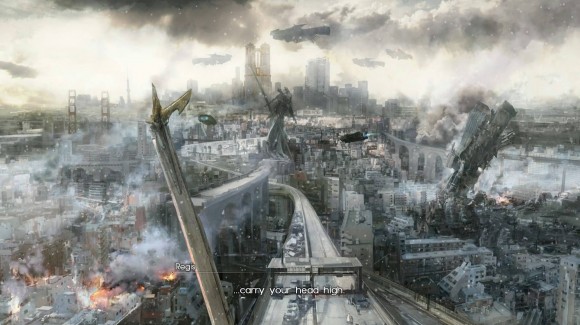 The concept of the world is interesting at at least

I also found the concept of the world to be intriguing. The idea of contemporary Earth but with high fantasy concepts is not a new one, but I am not sure I’ve seen it integrated to the extent to which it seems to be in Final Fantasy XV. How many times have you seen games that let you go to a tourist trap while murdering monsters? Unfortunately, when I speak of the concept in uncertain terms, its because what the demo chooses to show us, is a pretty average verdant flatland with woods and not much else. In a way it seems that Square-Enix might be trying to address the concerns that Final Fantasy XV might be a long series of corridors like XIII was. Though that problem was already fixed by the time that Lightning Returns came out, I imagine that they felt the need to make that point. Though I feel I need to remind you that Final Fantasy XIII had Gran Pulse where the game looked like a big open world, but chances are few people saw it because it was really late in the game. It still feels like an uninspired choice of venue. Considering the interesting concept of a modern fantasy world, I wish we could have seen more open areas. Not necessarily a main city, but maybe a small town? The area they chose reminded me a lot of Monster Hunter, except without Monster Hunter’s excellent combat system. 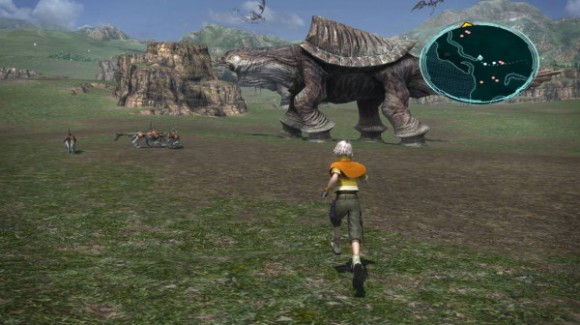 The area of the demo is reminiscent of Gran Pulse 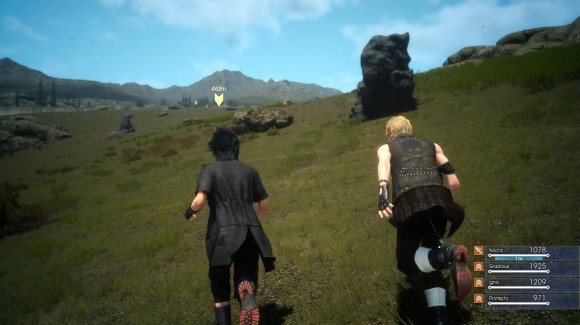 FFXV at least is prettier

This brings us to the lingering concern that the demo left me with: The combat system. You control only Noctis, who has the ability to summon weapons from thin air. You can set which weapons are summoned for each of the different instances of the battle, and the game will juggle them automatically depending on the situation. Holding down square will make Noctis attack continuously. Triangle will make Noctis do the currently active special attack, which can be changed on the fly with the pad. Holding L1 will make Noctis dodge all incoming damage, and occasionally give him the chance to parry attacks. Finally X will do a warp move, which allows Noctis to get out of trouble easily, and also do a warp attack to close in on enemies fast. Any action except attacking and using items will consume MP, which recover slowly over the course of the battle. The idea is that the player will time his attacks with the other abilities in a way that is reminiscent of Lightning Return’s Schemata system. In practice the combat ends up feeling closer to that of Kingdom Hearts, except more hectic, as your AI teammates seem to work independently rather than as a team. 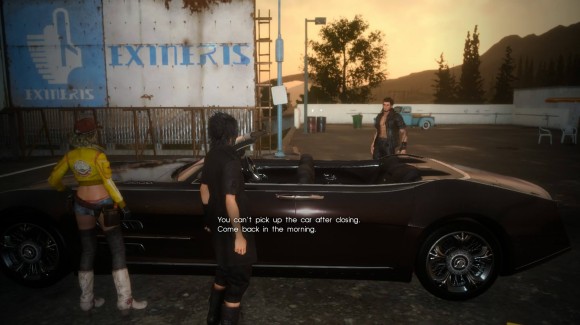 Maybe some aspects of the modern world could have been omitted.

Noctis doesn’t have any healing abilities, at least not in the demo. Ignus does have some healing spells, but more often than not, the healing he does seems random. He has ignored me and teammates during dire circumstance while sometimes healing during times where everything seemed fine.  What ends up happening is that you will run around the battle trying to help your friends when their HP falls to zero, and waiting for your MP to fill out. This eliminates any semblance of tactics from the fight beyond trying to stay alive, and leveling up if you find that a battle is too hard. In a way I feel that Square-Enix must be aware of these problems as well because the way that you defeat Deadeye is not through a tough boss fight, rather you do a quest to find a powerful summon that kicks in when Noctis’ HP falls to zero. This attack will kill Deadeye in one shot, and the fight will be concluded in the most anti-climatic way possible. It is fair to say that there are players that do not play Final Fantasy for the combat, and that it is not the main draw of the game, but the demo at least was filled random encounters. They are disguised so as to look like they are not random encounters, since the game seamlessly transitions to and from combat, but when enemies suddenly spawn a few meters in front of you it is certainly an indication that Square-Enix believes that combat is of some importance. 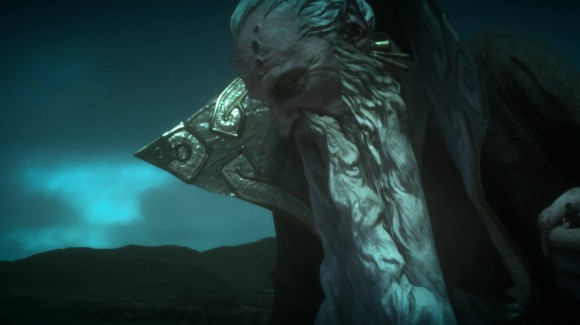 In my Lightning Returns review I said that a good system could make up for a story that was lackluster. I absolutely believe the opposite is true too. A bad system can make you want to stop playing a game with a great narrative. It sadly seems that it is going that way for Final Fantasy 15. There are a few things that Square-Enix can do to improve between now and release, such as working on your companions abysmal AI so they won’t stand on the sidelines looking at you while you are getting your ass kicked. The combat system itself is probably set in stone, so I don’t expect any radical changes to it. The combat system and lack of driving, a much touted feature in the game, worry me.  Still this was a short look at a big game, and it is possible that the impressions that are based on just a preview of the game are mistaken. Despite this I’d advice to tempter your expectations for the next Final Fantasy entry.