It takes a little while for Experience Inc.’s and Nippon Ichi’s Operation Abyss to actually decide to let you play it. After hitting you with a ton of story and introductions, you finally get to crawl into the most dungeoniest crawler to grace the vita since the last one. 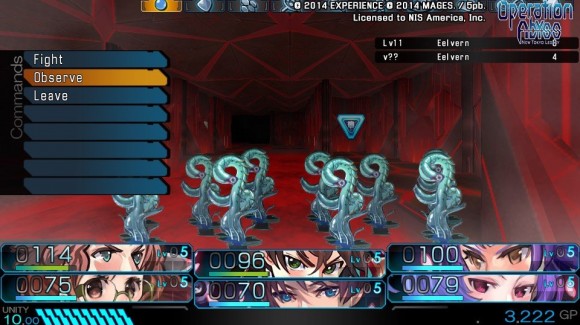 As soon as you start Operation Abyss it’s going to ask you if you’d like to play in “Basic” mode or “Classic” mode, and it’s not immediately clear as to what this means. Basically it’s a declaration of how you want to approach creating characters, and really it only affects the aesthetics (with some minor adjustments to stats and party stats). To put this eloquently, Basic and Classic affects how doofy your characters will look. While “Classic” mode allows for a wealth of editing options that can allow you to manufacture the Original Character Do Not Steal of your dreams, each of them ends up with all the professionalism of an RPGMaker 2003 character. Meanwhile “Basic” mode will leave you with simple avatar choices that, well, all look like utter badasses and easily blow anything you’ll design in Classic out the water. 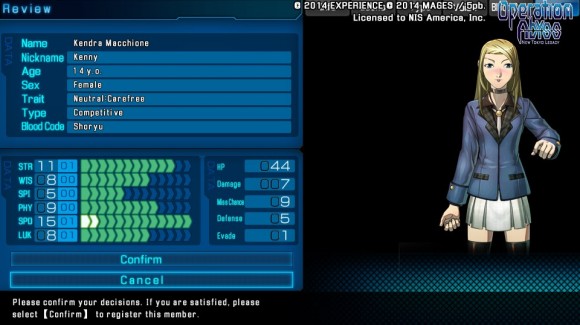 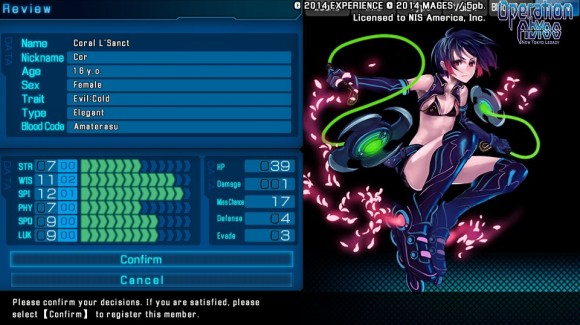 The game itself is about as old school as you can get with the dungeon crawler. You’ll traverse long, same-y looking 3D hallways reminiscent of the days of Persona and Doom only… Worse. Your movement is pretty stilted, with one press of the directional pad registering as one step, then a delay in each step after. If you bump into a wall you’ll hear the collective screams of your six person squad as I assume they all smash their heads against the wall at the same time. You’ll have to press X, a lot, to examine and explore your surroundings in hopes of a hidden wall or item. The longer you stay in a dungeon, the stronger the enemies you’ll fight, the better loot you get. This seems kind of like a no brainer but the title does make a point of it. Unfortunately enemy spawn rates seem pretty low in general, and the environments are just never that fun to explore, so the incentive to hang around for awhile is lost.

Combat is turn based, as you’ll face enemies head on. There’s not a whole lot in the way of fancy battle or character animations aside from seeing either your Doofy (Classic) or Utter Badass (Basic) avatar at the top of selecting your action on the turn. The combat system for all its simplicity manages to be pretty opaque. It seems as though certain aspects of the battle system could get to be quite complex and strategic, however the game is pretty awful at explaining itself and a lot of it is guessing, trial, error and educated guesses. The only real unique thing about combat is your squad’s ability to acquire synchronization points based on combat and story actions, which can be used to unleash special unity attacks. Other than that everything operates how you expect it might, with roles suited for tanking, magic, dealing raw numbers damage and healing. There is a formation to be mindful of, with your physical characters better off in the front row and casters in the back, it’s kind of RPG Strategy 101. 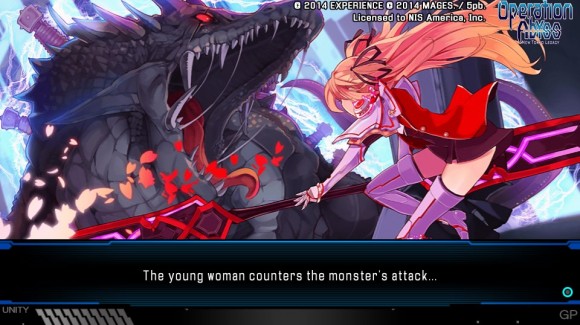 It feels as though Operation Abyss is meant to be the sequel to something, though as near as I can tell there are no titles that precede it. Yes there was Demon Gaze last year, but other than being developed by the same team there’s no discernible connection. The game just kind of assumes you’d know not only a lot about its combat, but a lot about its world. I’m not sure whether this is due to the localization job or simply how the story was written, but It always felt like I was trying to catch up to page 50 of the game’s textbook while everyone else was on page 399. I always had this feeling of being lost in both the story and the game’s systems.

Where I did have fun however was the character creator. Sorta. While I would have liked some more aesthetic fidelity between Classic and Basic mode characters, I ended up creating two save files just so I could play around with both. There’s not only a wealth of physical options to play with in Classic mode (while Basic gives you palette swaps on a few killer pieces of art), but you can play with your stats and story backgrounds as well. 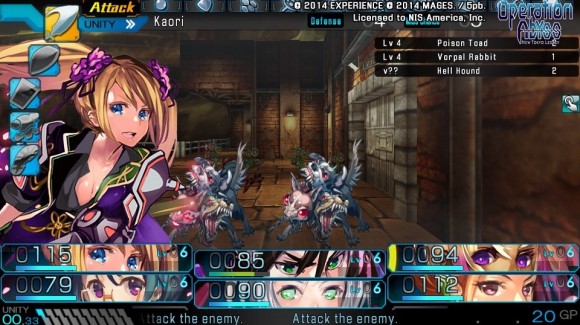 The biggest draw however is the idea of the Code Rise. Each heroine or hero you build can be genetically encoded with the blood of a historical myth or legend. Shinto goddesses such as Amaterasu, Renaissance artist Leonardo DaVinci and French warrior maiden Jeanne D’Arc serve as just a couple of the figures you can assign to your character’s bloodline.  They work a bit like Persona’s er, Personas or the Job Classes in Final Fantasy in which these Blood Codes will be your primary means of learning magic and abilities, as well as influencing your stat growth.

Unfortunately there’s not very many of them, with only eight blood codes total that have either a male or female version (That’s right, rule 63 Ghengis Khan), and up to six characters required in your party it’s very likely you’re going to see what each code has to offer relatively quickly. It’s true that there’s probably a bit more mileage to get out of the blood code concept and character creation for min/maxers, but it’s likely not too hard to optimize your party with say, a Florence Nightingale using character to compliment your Hitori Hanzo assassin. 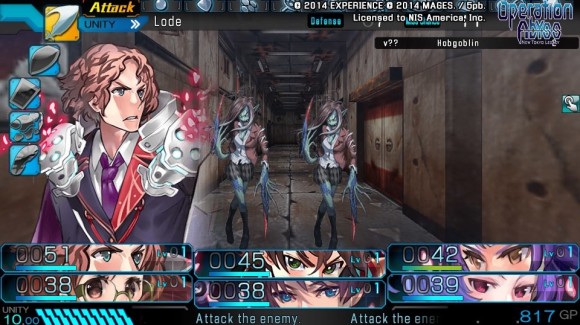 Now while I dig these old school romps it still feels like Operation Abyss is missing the heart of what usually makes throwback titles so enjoyable. Honestly, it feels like this is an old school dungeon crawler just because it was the easiest type of game to make and lacks the usual care and quality that goes into these retro pieces. It also throws a ton of the usual sci-fi and high school anime tropes at you, while not pushing for much originality of its own outside of the Blood Codes, which let’s admit, historical figures as video game heroes aren’t exactly fresh either. Even the disappointingly sparse number of Blood Codes is further evidence of just how little this game has going for it. It’s got a few hip things going for it, but the title would have needed to try a lot harder to be an enthusiastic recommendation.