A somewhat effective rhythm game held back by a lack of polish.

Jungle Rumble (or Jungle Rumble: Freedom, Happiness, and Bananas if you want to get specific) presents you with a simple premise. You’re a monkey, and in true monkey form you want bananas. But how monkey get bananas? By drumming to a beat of course.

When you hear “rhythm game” you may already have an idea in your head as to what to expect, but Jungle Rumble doesn’t quite follow the paths laid out with games like Elite Beat Agents or Project Diva that are constantly asking you to perform new moves with new songs. Instead the game follows closer to titles like Patapon where you order your characters around with preset beats that remain static throughout the game. 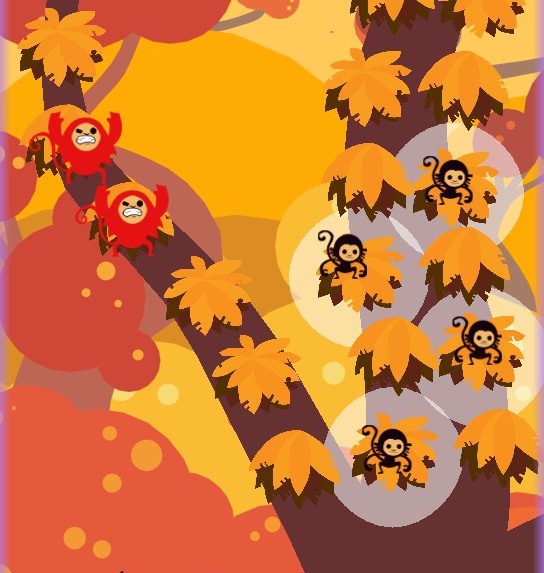 Jungle Rumble’s story follows the Mofongo tribe of monkeys who awake one day to find their precious bananas are being plundered by the neighboring Kogunga tribe. This of course won’t stand and it’s up to you to guide the members of the Mofongo group to meet with the Kogunga tribe’s sage and figure out exactly why it is they’ve decided to steal all your stuff. Shakespeare it ain’t, but the story is really just there to keep you moving from level to level and to also dispense an almost excessive amount of banana puns.

The first thing you’ll notice upon starting the game up is that you’ll be asked to hold your Vita sideways. This is due to Jungle Rumble’s previous home on iOS. While holding the Vita on its side might seem odd at first you’ll find that you adjust quickly, especially because the game is played entirely with the touch screen. The only real hangup I had was that if you follow the game’s suggestion of wearing headphones the Vita’s 1/8″ jack placement makes things a little awkward. 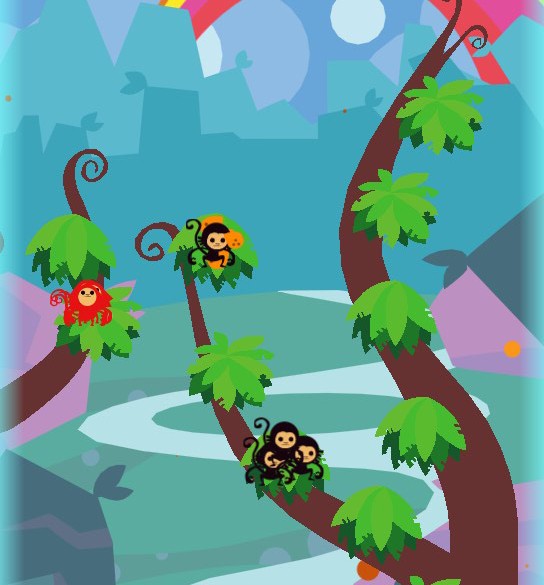 There are 3 worlds in Jungle Rumble with over 60 stages spread throughout them. Each level starts you out with a handful of monkeys scattered on tree branches. To move a monkey from one branch to another you tap the monkey, then the branch you want to move to, twice to the beat of the song. Similar patterns are used to move multiple monkeys at once and to throw coconuts at enemies. There are a total of 3 different beats that you can use to control your characters throughout the game and that’s it. The songs will change slightly from level to level, and occasionally the tempo will change noticeably with them but for the most part things stay pretty consistent. I know this might sound like a bad thing, but I actually found that the repetition went a long way to getting me into the music, bobbing along with the game’s simple drum tracks.

Once you complete a level the game will score you based on three factors: whether or not you finished the level within a certain time limit, whether or not you eliminated every enemy, and whether or not any of your monkeys perished. If you successfully land all three you’ll take away a coveted gold medal which gets you…zilch. Well there’s a trophy for getting all the golds, but for the most part that’s about it. There’s really nothing to unlock in Jungle Rumble, even the optional “side missions” that have been provided don’t really yield any kind of reward, you’re just doing them for love of the beat.

While the core of Jungle Rumble is pretty solid the exterior leaves something to be desired. Like a savory Toblerone wrapped in a tofu steak. Let’s start with the game’s menus, which are sluggish and unresponsive. Want to select a specific level to play from the map? The icons are itty bitty, and it’s perfectly normal to accidentally click a level you didn’t want to play. Mess up on a level and want to just replay it instead of waiting to die? Often by the time you have managed to pull up the button that will allow you to restart you’ve already died anyway.

For a game that comes from a mobile background it’s shockingly unfriendly towards playing in bursts. Levels are grouped into sets of 3-4, if you beat a couple levels in a set and then back out of the game you’ll have to repeat the last level you beat before you can carry on. I tried multiple times and was never able to successfully start a session back on the level I’d left on. Effectively this means that if you beat a particularly hard level you’re heavily incentivized to finish the rest of the set lest you have to repeat the more difficult level upon your return. It’s a shame because this is very much the type of game I’d love to pick up and play randomly, but the current system just doesn’t make it feel like you can commit to less than a full set of stages. 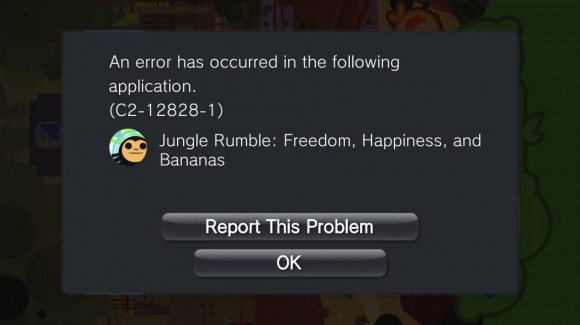 In a final act of defiance the game crashed on me with this error twice in its final levels.

If the sole judgment to pass on a rhythm game was whether or not it got you to move to a beat then Jungle Rumble would be sitting pretty. Unfortunately that’s not the case here and there’s just too many bad or lazy design choices to ignore. A lot of the game’s issues are things that could be polished and patched out. As it stands right now though it’s hard to justify the $4.99 price tag unless you’re seriously jonesing for a rhythm game fix.